Under the guise of combatting Covid-19, is China seeking more political influence in Latin America 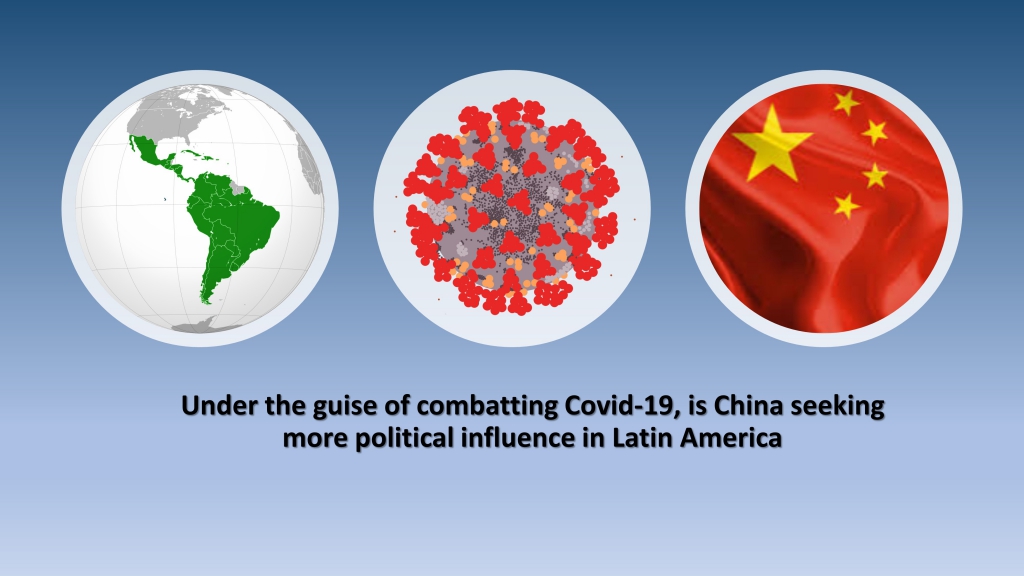 China has taken four types of diplomatic behaviors (top-level dialogue, material assistance, diplomatic dialogue and public propaganda) to deal with Latin American and Caribbean countries after the epidemic outbroke. With these measures, China aimed to discuss the domestic epidemic situation at the beginning. However, later on it turned to build a positive national image in the region, in the ways of introducing Chinese experiences, donating physical materials and counteract the smears leveled from different countries. These behaviors were named as so-called “mask diplomacy”, and generally they did have a positive effect on China’s national image in Latin America. Considering China’s economic recovery and its global strategy, Latin America would not become its diplomatic priority in the short term, but Sino-U.S. relationship and cross-strait relationship might influence Beijing’s behavior.

Since the outbreak of the epidemic, China has taken a variety of measures to deal with Latin American and Caribbean countries. According to the news reports from the Forum of China and Community of Latin American and Caribbean States (China-CELAC Forum), since January 23rd China has had over 231 diplomatic contacts related to the coronavirus in Latin America. China has taken four types of measures: top-level dialogue, material assistance, diplomatic dialogue, and public propaganda. 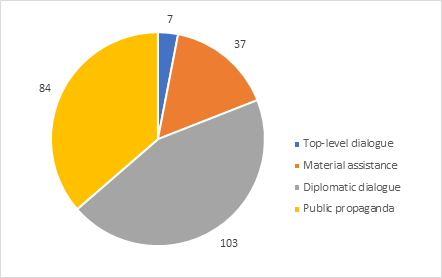 Data Source China-CELAC Forum website, made by the author

First of all, regarding top-level dialogue, the President of the China, Xi Jinping, has contacted seven heads of states (from Cuba, Chile, Brazil, Venezuela, Mexico, Argentina, and Peru) on the phone or by letter since February 28th. It should be noted that Xi called the Cuban President Miguel Díaz-Canel and Chilean President Sebastián Piñera in February, before both countries had suffered cases. When Xi contacted Martín Vizcarra on April 30th, there had been more than 35,000 people infected in Peru. Their conversation was mainly about China’s experience and potential material assistance.

Meanwhile, after China had preliminarily controlled its domestic epidemic situation, it turned to support other suffering countries worldwide. From March 13th to May 8th, China donated physical materials thirty-seven times to nineteen Latin American countries. Donations were mostly from the Chinese state, including Beijing and local governments, containing coronavirus testing kits, chemical reagents, air purifiers, masks and gloves. Some were raised by corporate foundations such as Alibaba and Tencent. On Twitter, Jack Ma (founder of Alibaba) announced a donation of medical supplies to 24 Latin American and Caribbean countries, including 2 million masks, 400,000 testing kits and 104 ventilators, offering to cover transportation costs (Jack Ma, 2020). Some donations were from overseas Chinese as well.

Moreover, Chinese embassies in Latin America have actively responded to the changing local public sentiment toward the Asian country. Since January 23rd, Chinese ambassadors in Latin America have met with local officials more than a hundred times. They have also held joint press conferences with health officials, published signed articles in mainstream newspapers, and given interviews.

Before the Chinese government controlled the domestic epidemic, the ambassadors mainly discussed China’s situation. However, after that, Chinese diplomats had two goals. On the one hand, they introduced Chinese experiences of dealing with the coronavirus and provided technical support. For instance, China held video conferences about the epidemic situation with twenty-five Latin American and Caribbean countries or areas on March 24th and sent a medical team to Venezuela on March 31st (Xinhua News Agency, 2020). In this way, the Chinese government has sought to build a positive national image in this region. On the other hand, Beijing wants to counteract the smears leveled from different countries, especially from the right-wing governments in the United States and Brazil.

China’s recent engagement in Latin America is usually referred to as “mask diplomacy” (Margaret Myers, 2020).  Mask diplomacy seems to be working; almost all the officials who have had contact with China recently have shown a positive attitude towards China and its assistance. The friendly relationship has been more apparent in Mexico. Apart from the public gratitude from President López Obrador and high-level officials, legislators and political parties also announced their support to China, like the President of the Chamber of Deputies Laura Rojas and presidents of Partido de la Revolución Democrática, Partido Revolucionario Institucional, Movimiento Ciudadano and Partido del Trabajo (Embajada de la República Popular China en México, 2020).

There are, however, two exceptions: Brazil and Paraguay. China and Brazil engaged in some disputes, due to the son of President Bolsonaro, Congressman Eduardo Bolsonaro, blaming China for spreading the virus. After the Chinese ambassador sternly warned that the incident “would hurt China-Brazil relations,” President Bolsonaro finally called Xi Jinping, apparently to make amends. More importantly, in this case, opposition politicians criticized President Bolsonaro and his family. Governors from several Brazilian states and some mayors decided to bypass Bolsonaro and write to the Chinese government asking for help (Diálogo Chino, 2020). In the meantime, some Brazilian businessmen also wrote to the Chinese embassy, declaring that Bolsonaro did not represent them.

Paraguay receives coronavirus aid from Taiwan because it has no formal diplomatic relationship with mainland China. However, it should be noted that Paraguay is experiencing some internal strife. The Frente Guasu, an alliance of leftist parties, sent a bill to Congress, asking to establish relations with China in order to receive material aid and help with dealing with the coronavirus.

Another point of view holds that China’s aggressive diplomatic response will have a negative impact on a large part of Latin American public opinion. In fact, before these diplomatic behaviors, some Latin Americans already had negative attitudes towards China (Margaret Myers, 2020). For example, the discriminatory comments from Eduardo Bolsonaro and Mexican actress Carmen Salinas had widespread adverse influence on China. Meanwhile, negative publicity coming out of social media, such as the dozens of videos showing Chinese people allegedly consuming live snakes, bats, and mice, have stirred up anti-China sentiments (Igor Patrick, 2020).

Nevertheless, there is no doubt that China is making great efforts to help Latin American countries during the present pandemic and build a positive image in the region (Margaret Myers, 2020).  Such efforts have been solidly connected with the so-called mask diplomacy.

It seems that China will not seek to increase its political influence in Latin America in the short term. China is already facing great internal challenges, dealing with both the disease and the much-needed economic recovery. After gaining a basic control of the epidemic situation in early April, a second outbreak emerged in Northeast China and also in some districts in the southern city of Guangzhou. In past pandemics, the second wave has sometimes been worse than the first. Thus, the Chinese government has to pay close attention to the spread of Covid-19. For example, on May 13th the northeastern city of Jilin was declared on quarantine.

Simultaneously, the Chinese government has to consider the tough economic situation. On April 17th, the National Bureau of Statistics of China reported a 6.8 percent drop in the gross domestic product (GDP) for the first quarter of 2020, compared with the same period last year. According to a survey led by Peking University, during the epidemic, nearly 90% (86.9%) companies faced cost pressures, and nearly 70% (69.7%) companies had cash flow problems. Specifically, about half of the companies have difficulty remaining in the existing cash for more than 3 months, and nearly 14% of them have difficulty supporting 1 month (澎湃商学院, 2020). Also, the Chinese government committed to eliminate poverty this year, and still plans to do it. Therefore, domestic economic recovery is the government’s priority after the pandemic.

Considering China’s global strategy, Latin America has not been its diplomatic priority. The Sino-Latin American relationship has been mainly based on economic and trade relations. But if we consider the Sino-Latin American relationship under the frame of Sino-US relationship, geopolitical competition between the two great powers is likely to arise in Latin America. Last December, Washington announced the “Growth in the Americas Initiative,” in order to create jobs, promote economic development and implement infrastructure construction in Latin America, and encourage American private investment in the region. Obviously, Growth in the Americas is a containment towards China’s Belt and Road Initiative (BRI) in Latin America, aiming to respond to China’s rising political influence in the region. To some degree, the “hedge” could reflect the geopolitical tension. A worsening cross-strait relationship could also raise Chinese political priority in this region. 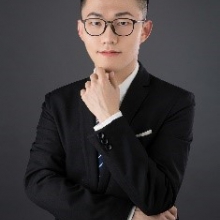 Hengyi Yang
Yang Hengyi is a graduate of Guang Dong University of Foreign Studies majoring in diplomacy and has been admitted to Institut Barcelona d’Estudis Internacionals in the Research Master’s in International Studies. Since fall 2018, Hengyi has become an assistant research fellow at Intellisia Institute and Guangdong International Economic Association, focusing on Theories of International Relations and Sino-Latin American relations. In 2019, Hengyi also served as a research assistant of Cambridge University and Johns Hopkins University.