The Production of Quinoa in Peru and Bolivia 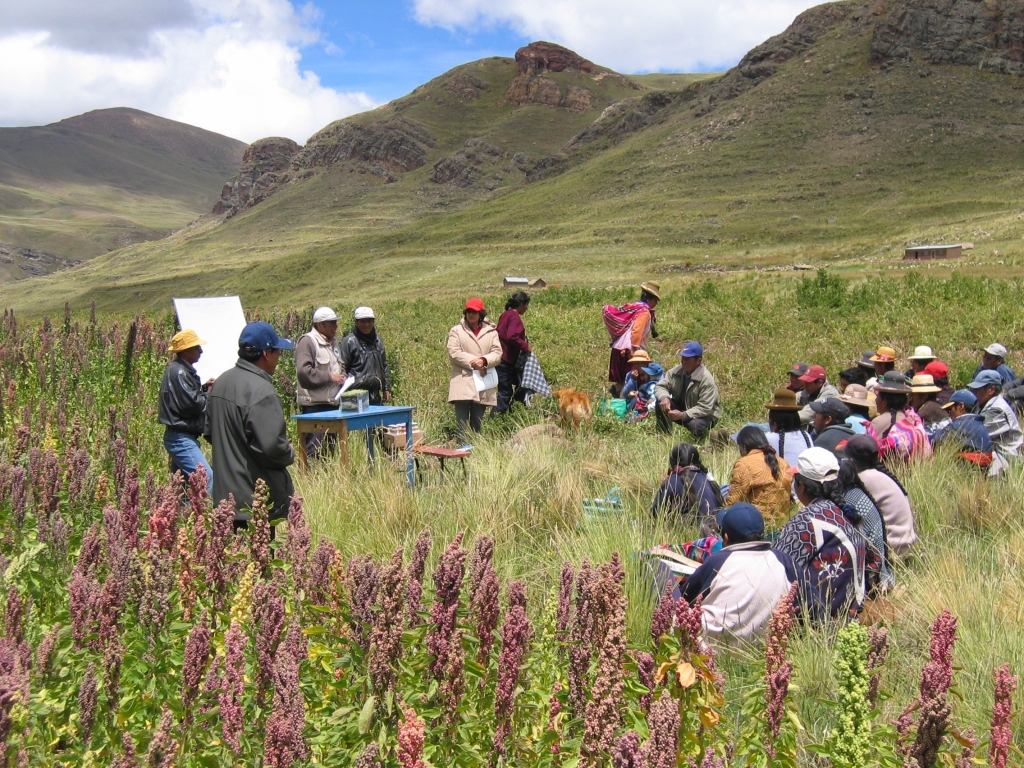 Even before the health studies were released about the incredible benefits of quinoa, Bolivia and Peru found themselves as the main producers and consumers of this crop. However, more recently studies have been released portraying quinoa to be the ultimate superfood. For example, NASA (1993) released a study on quinoa that declared, “while no single food can supply all of the essential life-sustaining nutrients, quinoa comes as close as any other in the plant or animal kingdom.” Likewise, Oprah Winfrey released an approval statement on quinoa and she even included it in her recommended “cleanse” diet. This has had a significant impact on many taste preferences of consumers in countries foreign to the production of quinoa.
As consumer taste preferences shift towards quinoa, the demand has increased for this product. However, the supply of the crop was not increasing at the same rate as demand. Thus, this increase in demand resulted in price level increases of quinoa. Specifically, in Peru and Bolivia the price has tripled to $6-$7 per kilogram. The unfortunate factor of this equation is that this increase in the prices of quinoa meant that lower class Bolivians and Peruvians were burdened the most with the price increases because consumption is more expensive. Despite this, there was an overall rise in the living standards in the households according to a study that separated households according to quinoa producers and consumers, quinoa consumers but not producers, and neither producers or consumers.
In continuation, the producers of quinoa experienced a huge profit during the first stage of the quinoa growth period in 2013. Specifically, in Bolivia 45% of the population rely on farming for revenue. Therefore, Bolivia’s growth rate rose from the average of 5% to 6.8% in 2013 when quinoa first started expanding. A similar rise in growth rates was experienced in Peru. However, the question was if these growth rates could be maintained.
This increase in profits and growth led to a shift in diverse production to many farmers strictly cultivating quinoa. This lack of diversity is something that we have seen fail many countries in the long run. In Bolivia, the government incentivized diverse production by providing agricultural subsidies to produce other crops. The focus was to reverse the focus on quinoa because depending on a single commodity is only beneficial in the short term.
Not only were farmers moving to only producing quinoa to earn a higher profit, but also outside entrepreneurs were joining the quinoa movement and growing their own. This meant that there were a great number of small firms in Bolivia and Peru selling quinoa for a profit. Likewise, European countries began to take notice on the booming quinoa business. There was a breakout of quinoa businesses in Europe that instigated an increase in competition across the world market for quinoa. Specifically, the number of total producers of quinoa has increased from 8 (1980), to 40 (2010), to 75 (2014). Finally, in 2015 there was an additional 20 countries that were growing quinoa.
To present a better perspective of the impact of quinoa on the world market it is important to mention that the General Assembly of the United Nations designated 2013 as the International Year of Quinoa (IYQ). Specifically, it was stated that “Quinoa was afforded a high profile as a crop with the potential to grow in importance in world agriculture” (Jacobsen, 2003; Ruiz et al., 2015). During the main period of 2013-1015, quinoa grew from its minor agricultural rank and became a potentially major crop. Finally, as a cost of the increase in competitive firms, there was a decrease in the wages that quinoa producers earned.
Due to an increase in competition, many argue that Bolivian and Peruvian farmers will be forced out of business because they cannot compete with their lower tier technology on a global scale. Specifically, in the Bolivia and Peru they use ox to plough land. Meanwhile, the European use of tractors allows for the land to be cultivated more efficiently at a higher rate of production (they have an 8 times as high yield rate). However, according to the most recent statistics from 2015, Bolivia and Peru remain the main quinoa producers in the world. Specifically, in 2015 Bolivia produced 92,000 metric tons and Peru produced 130,000 metric tons. This was an increase in production from 2014 where Bolivia had a level of total production of 83,603 and Peru had a level of 92,253 metric tons. Overall, the data table from 2009 to 2015 displays a steady increase in total production of quinoa in Bolivia and Peru. This can be viewed as a successful business for Peru and Bolivia because there remains a relatively high and steady demand for this product.
Despite the lag in agricultural technology Bolivia and Peru experience, I hypothesize that they remained the main producers because many firms and farmers specialized in quinoa. Also, Bolivia and Peru marketed their quinoa product as being authentic to the region where it originated, as well as being an organic product. This appealed greatly to the consumer market in the Western world that consists mainly of “hipsters,” vegans, vegetarians, and overall those who focus on maintaining a healthy, organic lifestyle. I conclude that the shift in consumption of quinoa benefited Bolivia and Peru greatly by increasing the total welfare of the population which led to increases in spending, investment, and consumption. Also, this shift caused an increase in total GDP.  Likewise, I found that total factor productivity also increased after the rise in demand for quinoa occurred because farmers began to invest in new and more efficient technologies.