New Transportation Projects on the Horizon for Bogotá 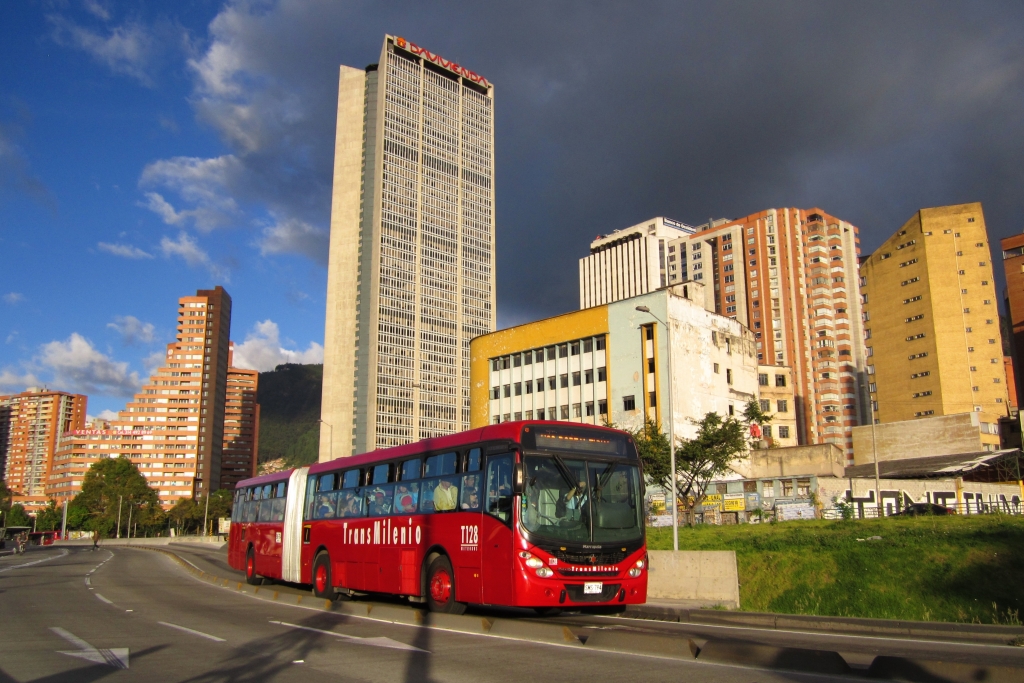 The capital of Colombia made headways in transportation in 2000 when they launched their Bus Rapid Transit (BRT) system, “TransMilenio.” The first rapid transit system of its kind implemented in the country succeeded in unifying thousands of independently operating bus companies under one system. Since it was opened to the public it has grown to include 12 lines serving 144 stations in the city of Bogota.1

Still, the most marginalized areas and individuals of the city are having problems accessing the city and this is being addressed in the development plan proposed by Bogotá City Hall called the “Sistema Integrado de Transporte Público de Bogotá (SITP)”.2 This plan first intends to address problems with the TransMilenio system, build a light rail metro for the city, and also build a metro-cable system to access two of the southern parts of the city.

Implementation of the SITP began in 2012 by addressing problems within TransMilenio including integrating more buses into the system, and making the system accessible to users through one payment card. It also proposes a public bid for the construction of a new station on a main avenue that would improve westward connectivity.3

The light rail system proposed by City Hall includes two separate rail lines that would connect Bogotá to larger cities in the outlying region. It would include 35 stations and have a line directly to the city’s closest airport.  Studies are currently underway that would address the feasibility and cost of the rail system. If it is followed through, operation is estimated to begin in 2018.4

The last component of the SITP includes the construction of two metro-cable lines in the areas of Ciudad Bolívar and San Cristóbal. These are two of the poorest areas of the city that are currently not reached by the Trans Milenio BRT. Decision to construct a metro-cable system for these areas is likely because of the highly successful metro-cable line constructed in the city of Medellin that opened in 2004.5 Developers of Bogotá’s metro-cable lines have conducted studies in conjunction with Medellin for 16 months while planning their own operations for development. Bogotá will have two operating lines to Ciudad Bolívar and San Cristóbal respectively, with the capacity to transport 7,000 people per hour between them. Transit time in the two southern sectors of the city will be cut considerably as these lines will take 15 minutes to bring them to a TransMilenio station.6 Construction of the lines is set to begin in 2015 and open to the public in 2016.

The Sistema Integrado de Transporte Público de Bogotá is a comprehensive urban mobility plan for the city of Bogotá, Colombia. It addresses current problems and proposes future solutions. If all plans move forward as proposed Bogotá can expect greater mobility within the city, but even more important, a higher level of accessibility for individuals who previously were constricted by transit boundaries.

Brianna Duhaime
My name is Brianna Duhaime and I am a first year graduate student at the Graduate School of Public and International Affairs. I am studying International Development, focusing on Non Governmental Organizations in an urban atmosphere. I am also pursuing a certificate in Latin American Social and Public Policy. I am from Boston, Massachusetts and got my BA from the University of Maine, Orono. I play rugby and am a crossfit athlete. I will be interning this summer with the nonprofit, The Runa Foundation in the Peruvian Amazon developing a medicinal garden project for local community development.