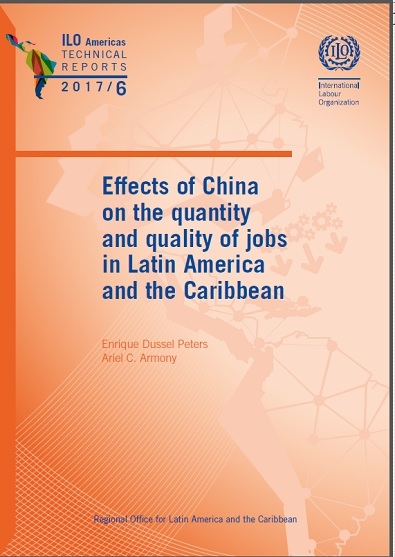 The International Labor Organization (ILO) has recently released a Technical Report in which Enrique Dussel Peters and Ariel Armony explore the effects that the increasing density of linkages with China is having on the quantity and quality of jobs in Latin American and Caribbean countries (LAC). The document provides a concise and persuasive description of the general progression of LAC-China relationship throughout the last fifteen years, identifies its main areas of impact, provides a careful review of the literature specifically focused on effects on job creation, and presents a preliminary assessment of those effects, based on and exhaustive analysis currently available data. The conclusions also suggest some areas that should be given priority by future research “given the limited [accessible] knowledge when it is necessary to negotiate with Chinese companies or make specific requests.”

At the most general level, the report confirms not only the growing significance of Chinese socio-economic presence in the region in the period analyzed. Such presence as progressed throughout different stages, becoming both more pervasive and more complex, to the extent that it has combined, simultaneously, integration through trade, funding, overseas foreign direct investment (OFDI), and infrastructure projects. The analysis disaggregates these four dimensions, for which specific driving factors are respectively acknowledged, suggesting that the design of policies should in turn reflect the peculiarities of each of those areas.

A critical aspect of that progression, the authors observe, is “the ‘centre-periphery’ pattern established in the trade and OFDI relationship” –which could be replicated and reinforced by the configuration of ongoing infrastructure projects. Indeed, “the growing LAC trade deficit with China and, particularly, the technological content of the trade, with a huge gap in terms of added value and technological level,” in turn mirrored by the concentration of Chinese OFDI in raw materials. Despite the remarkable pragmatism revealed by the behavior of Chinese companies, their management of labor issues reveals a deficit in the understanding of local cultures “as well as specific disagreements on compensations and benefits in labor relations.” This has a direct effect on the configuration of job-creation, to the extent that it feeds “the preference for recruiting Chinese nationals in middle- and high-level posts, as well as the high expenses incurred in training the local workforce.”

The disaggregated consideration of quantitative data shows that trade accounts for nearly two thirds of the 1.8 million jobs that China created in LAC between 1995 and 2016, while infrastructure projects and OFDI are respectively at the root of 20 and 15 percent. Particularly remarkable is the fact that the employment created by net trade with China between 2005 and 2011 equals 44 per cent of the one resulting from net trade with the United States during the same period. In terms of sectors, exports have mostly favored agriculture and mining, while imports have predominantly affected computers, textiles, footwear and wholesale and retailed trade. Dussel and Armony also underline the “pervasive presence of the public sector in China’s OFDI and infrastructure projects, although with a growing presence of private companies under OFDI.” They also individualize a small group of companies playing “ a pivotal role … in the quantity and quality of employment created in LAC.” Unfortunately, the absence of available information on the intra-company characteristics of the members of that group is also remarkable, that importance notwithstanding. As a result, the needs of knowledge required for a maximization of negotiations with Chinese companies have so far been very poorly met. The document ends with a series of concrete proposals for the development of future research aiming to fill that gap.

(The complete document is available online, both in English and in Spanish, at http://www.ilo.org/americas/publicaciones/WCMS_563727/lang--en/index.htm