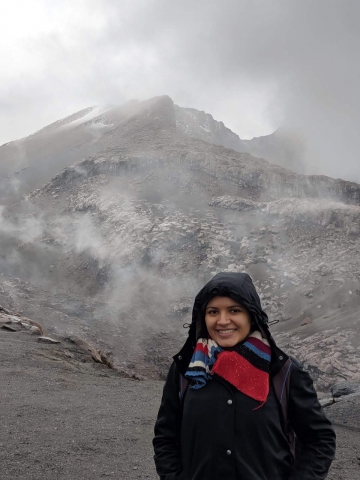 I am a full time student at the University of Pittsburgh in the civil engineering department as an Undergraduate and I work at the Center for Latin American Studies as a CLASS Ambassador. This is my third year working as an ambassador and I am also completing the Certificate of Latin American Studies. I was born in Bogota, Colombia and then moved when I was 9 years old to Mexico City and when I was 13 I moved to Pittsburgh, Pennsylvania with my parents and my brother and I’ve been here ever since.

How important is being Latina to your identity?

I would say it is very important, it is a central part of who I am. I take great pride in being Colombia and being Latin American. And since both my parents are from Colombian, I am very familiar with most of the cultural aspects even after I moved away from my country. I have always been surrounded by Colombian people, both in Mexico and the U.S. we sought out Colombian communities to talk to them and to share experiences.

Do you think being Latino connects you with other Latino students?

At Pitt, I don't really think so. If you meet other Latino students and befriend them its not usually because they are Latino. I used to be part of SHPE Society of Hipanic Professional Engineers and even though all those students had latin american ancestry or were latin american themselves I didn't necessarily find a connection with them on a more profound level.

Is there something that you particularly value about your nationality?

As a Colombian, there is the perception that I have a hard working ethic. My parents came from very humble backgrounds and worked their way up so I take a lot of pride in that. Colombians are also very very welcoming to everyone and I think that's a very cool thing to have as part of my culture. That's why we seek out other Colombians when we move, because we know we will be able to interact with them, they're like family.

Have you been treated differently because of being Latino (in the workplace, in public setting, school, etc.)? If so, can you describe a situation?

Yes, in my internship last summer somebody at the office asked me how marijuna was made. I have no idea how its made but they just said I was the expert because I am from Colombia. I have never interacted with marijuana or how its produced so I felt that it was a little uncalled for. By now I know that people don't mean to make me feel bad, but people don't think about saying things like that because were used to it. At my high school there was one boy who grilled me about immigration and how immigrants take U.S. jobs and that was something I took really personally because my dad works here for a German company. Not even in Mexico did people say that kind of stuff to me so I was very offended.