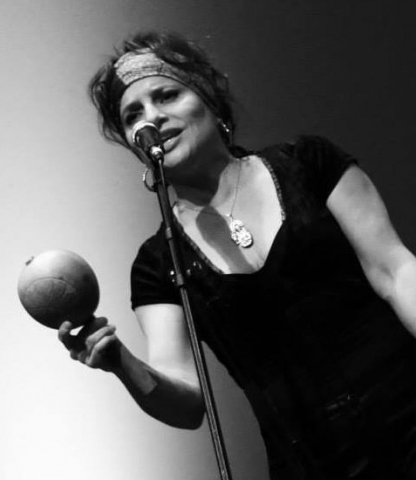 What gives me life is music, is performing poetry, is standing on stage with a band of supremely talented fellow musicians and artists liberating an audience of the burdens of day-to-day life through music, through story, through the drum, through a poem. That gives me life. However, what sustains my financial stability is my role as an administrative professional, teaching artist, and program leader in the arts & culture sector.

More important to me than being “Latino” is being Boricua - Puerto Rican. As a territory of the United States, what is most urgent to me is the dignity and self-determination of this colony, while aligning with fellow communities who share a common struggle. “Latino” as a label is a political construct in the U.S., an identifier to pull together political power of a people united by a shared history of European colonialism in the Americas and Caribbean. A gendered term derived from Latin, I amplify the term “Latinx,” as a unifying identity. If I am going to use a term that connects me to a shared history of other countries of the Americas, then I prefer a term that is more fully inclusive rather than male identified and binary driven.

I enjoy the complexities and swag of hybrid identity – Nuyorican. I embrace the resilience, and survival through on-going struggle, related to the journey of migration. Being born a U.S. citizen under colonial rule, I honor and relate to other territories of the United States such as Guam and American Samoa, in addition to the Philippines, Cuba, the Dominican Republic and Haiti, and even Hawaii despite being annexed by the U.S., who offer examples of liberation through epic resistance. I value the connection to immigrants from around the world, and particularly from the Americas – Mexico, El Salvador, Peru, Chile, Colombia, Panamá, etc, for we are hard workers, make savory art and culture, and value family in the face of struggle. And, of course, I love Caribbean culture – and the jewels created from our resistance, such as delicious food, internationally admired music, literary leaders, and ivy league scholars who challenge colonialism and uplift the pueblo. I value the contributions of the African diaspora in the Americas, without whom our countries, cultures, and technologies, would be sorely diminished. And, I appreciate the kinship one feels when speaking a shared language other than English. And tostones. I love tostones.

Do you mean, other than the government's response to Hurricane Maria in Puerto Rico?

From an education perspective, despite the fact that English is my first language, and having demonstrated above grade level ability in the language – having won a district wide writing contest, and competing in a spelling bee in elementary school – I was mandated to take a citywide test in English, along with fellow students with Spanish surnames, every year of my public school education, up until the eighth grade. None of my Anglo, Afro, or Asian American peers had to take the test, just the students with Spanish surnames. I was offended by how elementary the test was, and that we were singled out, and I realized that there was an institutional presumption about our language capacity, based on our heritage and being bilingual.