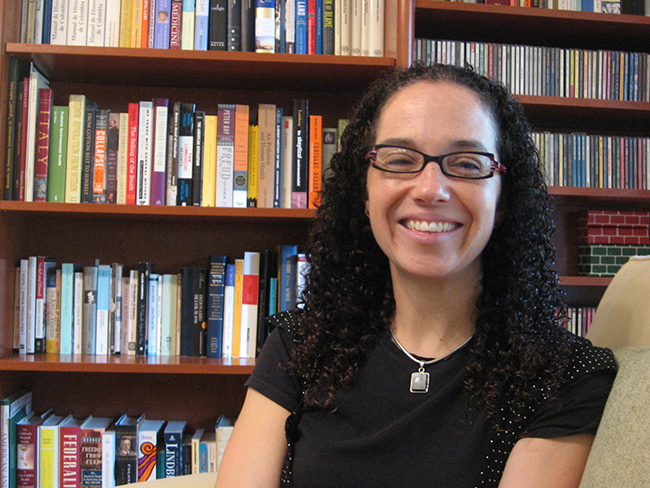 I am a professor of economics at the University of Pittsburgh.

How important in your identity is being Latina?

When you are from a certain country, and you then become an immigrant, looking at the cultural differences makes you understand better what it means to be from a specific place. It is certainly the case that being here, talking to people, and having an accent identifies you from a certain part of the world. I get asked a lot where I am from, and people want to hear the stories. These stories certainly help you define who you are. My background really makes me someone with multiple identities. My mother’s family was not from Latin America, so there was a big identity mix, but all these different components have their unique features. My mother’s maternal family is Jewish, from Turkey, so there is an identity piece there as well. I was born and raised in Colombia, then I came to the States, and I am a United States citizen now, so being Latina is part of my identity. But I am very much a citizen of the world in many respects.

Is there something that you particularly value of your nationality or being Latina?

In this process of living in a different place, becoming a US citizen, and marrying an European, one thing that I think defines Latin American people is that they are really friendly, optimistic, socially oriented, authentic people, and that is really different. You can see how these same characteristics together are hard to find in the other cultures that have been a part of me throughout my history. There are certainly a lot of economic and political issues in Latin American countries, and I try to teach some of that at Pitt in my undergraduate classes, or to study this in my research, but it is interesting to think that despite these issues, there is this other life of Latin American people that is strong and noticeable, and that coexists with other problems around the continent.

Have you been treated differently because of being Latina (in the workplace, in public settings…etc.)?

The university environment is a little bit of a bubble because you are in contact with people from many different parts of the world, and it is a very international place, so you don’t think that people are any different. You don’t feel like you don’t fit because everybody is from different parts of the world. And people who are attracted to these academic environments are people for whom these things are really normal. But when you go out there in daily life in environments where the amount of interaction with foreigners is not large, you do feel different, like you don’t belong somehow, even though you have been here for so long and you are a US citizen. When you go in the world outside the university, those are places where you do find a lot of people who notice your accent, who know you are not from here. Of course for some people this is good and they welcome it, but for others this is strange. One thing that I remember especially, was about 10 years ago, when I went to Texas to give talks at different universities for over a week going from town to town. I remember that one morning I was in this hotel, all dressed up to go give my talk. I was in the elevator going down to the lobby and I remember talking in Spanish to someone else in the elevator, when another person turned to me with this face of “why are you dressed up in this elevator, in this fancy hotel, you don’t fit the pattern” type of look. It appeared to me after being there for a week that Latinos in Texas are boxed in some sort of false identity, because they have certain types of jobs, and because they may be illegal immigrants or legal immigrants that have very specific types of jobs. People were very surprised to see somebody speaking Spanish in a different context; it was not what they expected. I had never felt particularly looked at when I spoke Spanish, like I did when I was in Texas, which was surprising to me because it is a part of the United States where immigration is so large that you would think it would be something that people are used to. Instead it was like this “oh why aren’t you working in McDonalds?” type of look.