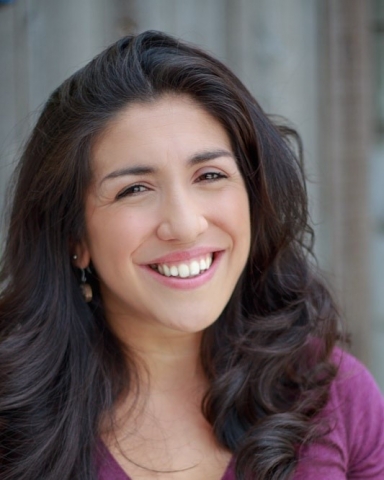 I am a professional actor, teaching artist and improviser. By day, I work for Kaiser Permanente's Education Theatre in Oakland, California, where my team and I use theatre, visual art, and team building to explore mental and behavioral health with teens. I have work in professional theatre for 15 years and have been a part of several world premiere plays dealing with political, social, racial, gender and economic issues. I am also part of an all female improv troupe which is unusual considering the improv/comedy scene tends to be filled with white males.

Being Latinx has always been incredibly important to my identity. I grew up in the Mission District in San Francisco at a time when the neighborhood was still predominately Latinx as opposed to the gentrified tech playground it's become. The streets were filled with families from all over Latin America. The smells of delicious food from taquerias floated through the air. The sounds of loud rhythmic music bumped out of cars as they cruised by. There were vibrant murals that reflected indigenous histories and the struggles of immigrants. Carnaval and Dia de los Muertos were annual barrio celebrations. At home, we spoke both Spanish and English. My Tias, Tios and primos were always visiting, it was like a constant holiday party only without tamales. My Abuelita taught me how to cook traditional Mexican cuisine and how to treat health ailments with herbs and invocations. My Abuelo taught me how to dance Salsa and how to call out Loteria cards. While I knew I was Latinx (I'm half Mexican/half Salvadorian), I also felt inadequately Latinx. As an adolescent , I didn't speak Spanish well. I liked rock and alternative music. I was obsessed with American stand-up and sketch comedy. I did theatre. I played volleyball and basketball instead of futbol. My first boyfriend was gringo. I would constantly hear, " You don't act Latina" from my peers. This was usually in reference to my strong academic habits, lack of make-up and non-accented English. I resented not being thought of as "Latino enough" by my own community. I found my peers comments hurtful and petty. My thinking was, "What did it matter if I liked what I liked and got good grades?" I was representing my people in a responsible way that defied stereotypes. It wasn't until I moved away to theatre conservatory that I felt actual ownership of my Latinidad. I was one of six Latinxs in a theatrical educational institution of over 100 people. Suddenly, speaking Spanish felt more important than before. Wearing clothes that were culturally expressive was a priority. I wanted to be around the comfort of people who understood the duality of being raised with old school/old world values while growing up in American culture. As an adult, being Latinx definitely plays a factor in many aspects of what I do professionally. As a theatre artist, I'm in the business of telling stories that reflect the human condition. As a woman of color how I participate in these narratives shape the audience's experience and their ability to relate to the story. I made it a point to align myself with theatres/directors/playwrights which tell diverse stories and go beyond stereotypes. I am also part of a group that founded the Bay Area Latinx Theatre Artist Network, which was our response to repeatedly hearing casting directors say things like " The pool of Latino actors/designers/playwrights/directors is shallow in the bay. " As an educator, I have the honor of working with young people who are very impressionable and still finding their own voice. I cannot count the number of times my students have gotten excited about theatre because I speak Spanish or look like them. This is particularly important to me when I think about the young women of color that I meet who see me as a role model.

As a Latinx, I value resiliency and courage. Whenever I encounter a problem or situation that makes me nervous, scared, doubtful, I think of my Abuelos and my ancestors. I think of the fearlessness it took to move to a new country with almost no money or resources. I think about the abuse, mistreatment, racism, sexism, class-ism that they endured to fight for opportunities. I think of how the blood that runs through my veins also ran through the veins of people that built civilizations and explored new worlds. I think of people who are so proud of where they come from that they are willing to share those experiences with others regardless of reception.

Mostly, I've been treated positively because of being Latinx. I don't know if that is because I live in California where there is a large Latinx population or if it's because I was born and raised in SF and am around a lot of progressives and liberals. Sometimes the positives are really mundane perks like a free coffee or appetizer from a restaurant employee I chatted with in Spanish. The bigger positives have been around employment. Often times when someone is looking to cast a role that is written for Latinxs or someone is looking to hire a teaching artist that is Spanish bilingual, they call me.