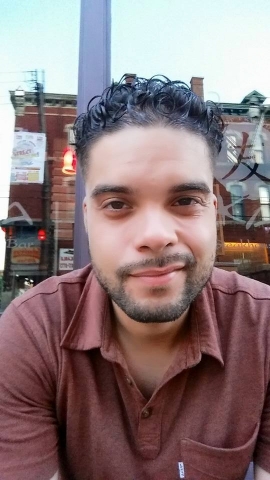 I work in nonprofit as a program director for the YMCA of Greater Pittsburgh, where I oversee a program called Hope For All. Funded by United Way, Hope For All is a collaboration between the YMCA of Greater Pittsburgh and YWCA Greater Pittsburgh to identify distressed households and provide them access to benefits and resources that enhance their quality of life. I have operated in this role since June, 2014; prior to that, I was a community organizer for several years in the community of Homewood working with residents to address issues of safety, education, and beautification. At my core, I'll always be an organizer!

Being Latino is absolutely important to me; it's part and parcel of who I am. Almost every decision I make is informed by it. Particularly now, with the political climate of the U.S., I approach everything from the perspective of "what are the implications for black and Latino communities? How can I contribute to this conversation based on what I know and feel?" I attribute a lot of that to my own upbringing as a Puerto Rican male in New York City. Most people who know me know how proudly (and loudly) I proclaim my heritage.

I don't know that I can narrow it down to just one thing. As a Puerto Rican, I enjoy everything associated with my nationality -- the food, the music, the customs, the language. But having this larger, umbrella identity of 'Latino' is complex and intricate to describe, as Latinos are a complex and intricate people of different nationalities and origins. If I had to pick one thing, however, I think that would be it right there; this concept of being connected, in a very broad yet intimate way, to complete strangers as a result of our lived experiences. My community is global, and there's something incredibly powerful about that.

I hadn't experienced any real disparity in treatment until I moved to Pittsburgh. Coming from New York, I'd been exposed to a wealth of diversity; I was embraced without trying. Here, though, everything about me has been called into question at some point or another. I've heard it all: "You don't 'look' Latino"; "are Puerto Ricans the same as Mexicans?"; "how do you spell your name?"; "how do you pronounce your name?". I remember once, maybe about eight or nine years ago, I was working a part-time job at a library when a woman approached me and wanted to file a complaint with my manager because of some imagined transgression I committed. She asked for my name and, when I told her, her response was "I thought so." I stopped what I was doing and asked her for clarification, at which point she went on a massive tirade about how "people like you are stealing jobs from honest, hardworking Americans." I remember my face turning red and having to maintain my composure while she continued to go off on me with such vitriol. One of my coworkers was stunned; his mouth was agape and he didn't know what to say. The woman spoke with the manager, who then asked her to leave the premises. I was so upset I excused myself to the staff break room and stayed there for the rest of the afternoon, I think. It was then I realized how much farther Latinos have to go before we can be accepted in this country (or anywhere where people of color are marginalized).