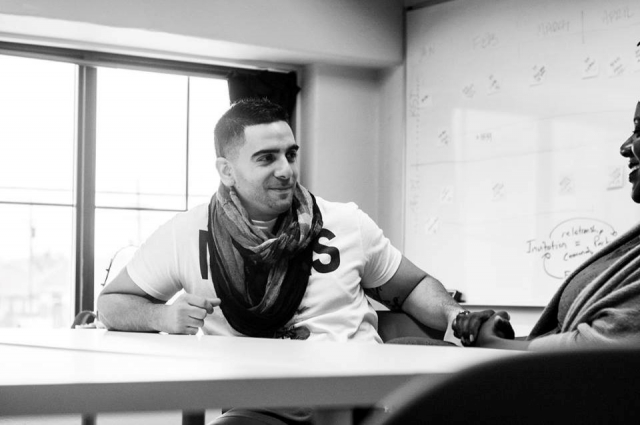 I do a few things for a living. First and foremost, I am a memoirist and interdisciplinary theater artist. My writings unpack a range of moments, which collectively capture my coming of age as a Puerto Rican kid growing in the Hunts Point section of the South Bronx. For example, I reflect on experiences such as the passing of father from cancer, becoming a father myself, and my time tenure being a (Latino) professor at Duke University. My stories embody concepts like home, trauma, coping, healing, and revolution. As a performer, I enjoy bringing my stories to life. Instead of simply reading sections, I love to perform them. Creating aesthetics experiences that captivate and engage audiences. My performances are like sensory overload emphasizes the smells, sights, and sounds of my stories. I am also co-founder of Sons of the Boogie, an arts collective fusing pop culture with the eclectic style of the South Bronx. I, along with renowned artist and trendsetter P.H.A.S.E. TWO, founded a creative space to represent and preserve our respective cultural histories as South Bronx sons. It's a platform for our work and also a space seeking to collaborate with other artists who share and preserve the stories and histories of the Bronx and other communities whose experiences are often misrepresented or untold.

I am also an independent scholar. I have a PhD in education with a focus on curriculum, culture, and change. My research interests include Sociocultural Foundations of Education, Urban Education, Cultural Studies, Arts as Social Justice, South Bronx History and Culture, and Boricua Identities and Lived Experiences. My work has focused on males of color and traditionally underserved and underrepresented populations in postsecondary education. I have held numerous positions in academia. I was an Assistant Professor in the Teacher Education Department at CUNY’s York College, a Postdoctoral Fellow at the University of Pittsburgh’s Center on Race and Social Problems, a Visiting Professor of Education at Duke University, and an instructor in School of Education at the University of Pittsburgh.

How important is your identity is being Latino?

I don’t identify as Latino. In New York I was Hispanic. When I was down South I became Latino. After reading Suzanne Obler’s Ethnic labels, Latino lives I understood that the terms Latino and Hispanic were not inclusive of the Caribbean. I wasn’t born in Puerto Rico. So I started to use Nuyorican, until I realized Nuyorican was this term I used when my cultural authenticity was questioned. How can you be Puerto Rican and not speak Spanish? As if authenticity were rooted in the performance of Puerto Rican. These moments pushed me to explore what it meant for me to be Puerto Rican. So I read, and read, and read some more. Down These Mean Streets, When I was Puerto Rican, Boy without a Flag. Now I identify as a Boricua, a Bronx Boricua. With all that said, being Boricua is extremely important to me. I represent a specific intersection of Boricua and South Bronx culture and history.

I value being part of a cultural rich history committed to the nationalism and civil rights of Boricuas from the island to the mainland. I value being connected to a lineage of people who have worked, taught, created, and fought in the name of their Isla del Encanto like the Tainos on the island of Boriken, the Young Lords, Ghetto Brothers, Dr. Pedro Albizu Campos, Piri Thomas, Pedro Pietri, Lemon Anderson, Mayda Del Valle, Flaco Navajo, Esmeralda Santiago, Rita Moreno, mi abuela Virginia Rivera, so on. I am all these people. I am all these things [educator, artistic creator, social justice worker]. So when I say I am Boricua I am not just claiming a cultural identity, but also a very political identity rooted in a long history of colonization and resistance.

Being Boricua makes me this ambiguous exotic brown body in white spaces. My experiences are similar to the writings of Willie Perdomo,

Hey, Willie. What are you, man?

No, silly. You know what I mean: What are you?

I am you. You are me. We the same. Can't you feel our veins drinking the

But who said you was a Porta Reecan?

I thought you was a Black man.

Is one of your parents white?

You sure you ain't a mix of something like

The situation that will always come to mind is my 2 years as a professor in the Program in Education at Duke University. I was the only faculty of color in the program, which unfortunately is not such an anomaly in academia. Shockingly, I was the first ever faculty of color hired by the program. Think about that for moment. It is hard to believe that it was 2012 and Duke University’s Program in Education had never hired a full-time faculty member that was not white. Considering Durham Public Schools are 50% black and 24% Latino it was extremely problematic to have never had a faculty member representative of the communities the program is supposedly committed to supporting. Who knows? Perhaps my hiring, which coincided with Duke commemorating the 50th anniversary of the first black students attending the university, was the Program in Education (PiE) leadership celebrating integration.

“Wanna change the ‘system?’… BE the system.”

As a Professor of Education, I entered academia to BE the system I wanted to change. It took only 2 years at Duke University for me to reconsider my chosen career path. My Duke experience shook me to my core and left me wondering if change is attainable. Although unique, experiences similar to mine have occurred at Duke for quite some time. For example, in 1990, Dr. Henry Louis Gates Jr. accepted a faculty position at Duke, but at year’s end he had left for a faculty position at Harvard University. A couple of years later, the New York Times published an article in which Gates was quoted as describing his one year at Duke as “the most racist experience I have ever had in my professional life.” Similar to Gates’ experience, my two years at Duke, specifically in the PiE, was “the most racist experience I have ever had in my professional life.” Although Duke has made significant progress since Gate’s departure almost 15 years ago, there still remains a culture reminiscent of the “plantation” environment he felt.

I get Gates’ sentiment, but I have struggled articulating the parallel between a plantation culture and my experience. However, after recently watching the film 12 Years a Slave, I immediately understood the intersection of my Duke experience and the residual impact of plantation life.

God forgive me for my brash delivery

But I remember vividly

What these streets did to me

The institutionalized racism I experienced does not compare to what Solomon Northup experienced during his 12-year enslavement on a Central Louisiana plantation. The leadership in Duke’s Program in Education never called me a spic or nigger, but they did not have to because their behavior did just that. I was never physically threatened or maimed, but the hostile working environment, discriminatory practices, microaggressions, workplace bullying, and retaliation I experienced at the hands of PiE leadership left me broken in other ways.

However, what was more hurtful than any coded or implicit attack was being treated as less than human as if I did not exist. In what ended up being my last year, I lived the words of Ralph Ellison’s, The Invisible Man: “I am a man of substance, of flesh and bone, fiber and liquids – and I might even be said to possess a mind,” but as a Latino professor part of an all white faculty body I was invisible. Program leadership, fellow faculty and affiliates refused to see me out of fear of confronting the power and privilege rooted in their reproduction and maintenance of systemic white supremacy.

In short, my hiring was simply a move to claim my body for the program’s diversity needs. Another moment of colonization. Program leadership assumed I would be content with just being employed. Wrong. As a Brave Lord (Boricua), I resisted. I challenged. I realized my agency. I awakened a voice that demanded transformation, justice, and liberation. It came at a cost. The trauma I endured at Duke caused PTSD and a vision impairment (Central Serous Retinopathy). But all worth it given that my stance helped mobilize Duke Latin@ students (Mi Gente) in fighting for issues of equity and justice for Latin@ students, faculty, and staff.