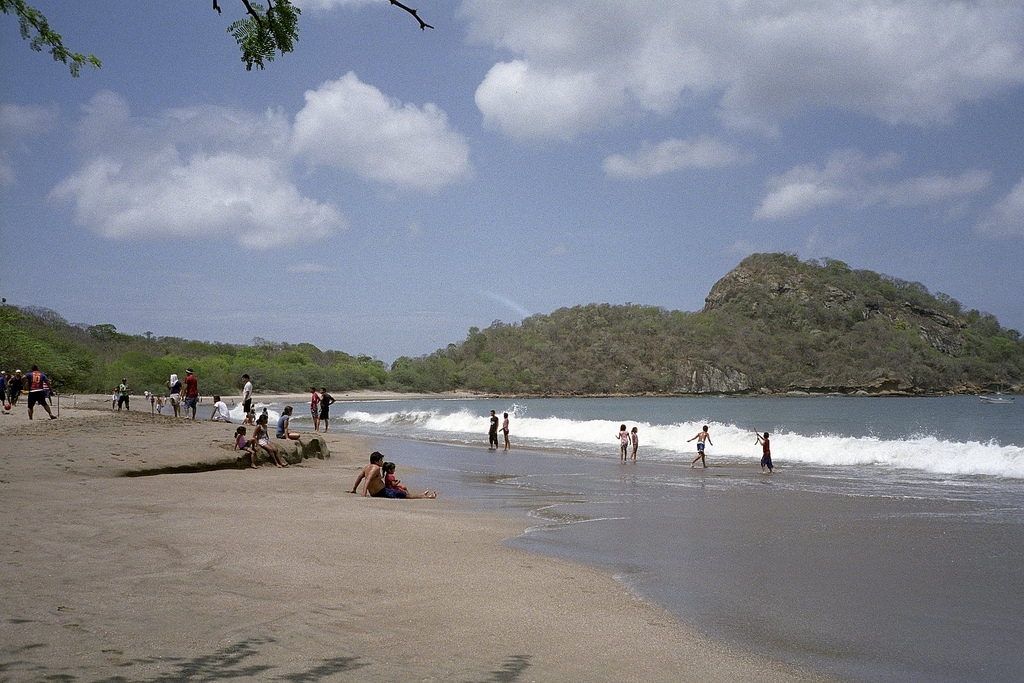 Recently, the news about the approval of the construction of the Nicaragua Interoceanic Canal have caught the attention of news media and people around the world. Concerns about the detrimental environmental consequences of the megaproject are coupled with unease about the socioeconomic impacts to local communities that could result from their direct displacement and from the lost of access to the resources that support their livelihoods. These clashes between global economic interests and local modes of subsistence are not new to Nicaragua, however. The growth of the tourism industry, particularly along the Pacific coast, for example, has created similar struggles that are already taking place between local communities and stakeholders in the tourism industry.

Our research (Alvarado and Taylor 2014) specifically looked at the struggles over access to marine resources in the small fishing village of Gigante, on Nicaragua’s Pacific Coast. These struggles result from an overall shift from a small-scale/subsistence fishing economy to a tourism-based economy that has produced winners and losers. In addition, we looked at more direct struggles that could stem from competition for space and from the implementation of a Marine Protected Area (MPA) that is specifically being promoted by large tourism operators in the area and that threatens to enclose some of the most important fishing grounds for Gigante’s fishermen.

For Nicaragua, tourism has been a way to inject much-needed foreign exchange into the national economy, the second poorest in the western hemisphere. To accomplish this, Nicaragua passed a series of laws that incentivized investment in the tourism industry, particularly from large capitals (e.g., Law 495 & 306). Since 2007, as a result, tourism has been among Nicaragua’s top three exports along with coffee and meat. To illustrate the importance of tourism revenues to Nicaragua, in 2011, tourism brought 377 million dollars into the national economy, a 22 percent increase from the previous year and representing 5 percent of the total GDP. As tourism continues to play a dominant role in Nicaragua’s economy, however, conflicts between the more traditional modes of subsistence of Nicaragua’s rural populations and demand for resources by the elite for leisure and profit occur more frequently. Along the Pacific coast, where tourism development is occurring at an unprecedented rate, the question of how coastal communities, their culture and their livelihoods are shaped by tourism becomes crucial.

The fishing village of Gigante is located 124 kilometers from the capital city of Managua on the southwestern Pacific coast in the Department of Rivas, Municipality of Tola. This area was part of a vast private property known as finca Güiscoyol purchased by Nicaragua’s dictator Anastasio Somoza in 1937 and used for large-scale cattle ranching for the next several decades. After the triumph of the revolution in 1979, the Sandinistas confiscated the land and later re-distributed it among campesinos grouped in agricultural cooperatives through the Agrarian Reform. Previous experience as fishermen and proximity to the ocean made thesecampesinos turn to the ocean for subsistence. Tourism proliferated in Gigante through a transfer of land from local peasants into the hands of developers. Ever since the redistribution of land, private developers have secured and continue to secure more of these coveted coastal properties. The tourism boom has put a price on these lands and many are seeking to cash in, leaving the local population vulnerable to land grabs by more powerful stakeholders (see research by my colleague Anna Sveinsdóttir at the University of Denver for more on land grabs in this region of Nicaragua).

Today, fishing provides food for households and a source of income through small-scale operations. Species of commercial value such as Dorado, Snappers, Lobster and Groupers are captured to supply global demand and, more recently, to meet the increase in local/regional demand from tourism. By-catch from daily operations that target income-generating species is usually taken home for the family to consume and thus represents an important source of protein for locals. Indeed, Gigante is a fishing dependent community. Most of this food source as well as the income-generating fishing effort take place in very close proximity to the coastline, making access to close-to-shore fishing grounds vital for the community. There are several reasons why close-to-shore fishing predominates. First, species of commercial value such as lobster and snappers favor the rocky bottom/reefs that make up this coastal ecosystem. Local fishermen have accumulated extensive knowledge about local ecology and bathymetry including particularly productive underwater rocks. Most of these productive fishing grounds are within 3 kilometers from shore. Secondly, fishermen in the area have limited mobility as a consequence of the state of the equipment used in fishing operations which include the small fiberglass boats and deteriorating engines both of which prevent fishermen from venturing far off shore, particularly in months of high winds. Indeed, it is not uncommon to read in the newspapers or hear stories about fishermen lost at sea, caught in winds that their small boats and old motors could not withstand—some are found days later drifting in the currents, others don’t end up being so lucky. Lastly, another factor that limit the mobility of fishermen and thus contributes to making close-to-shore fishing essential is the operation costs related to fishing effort. Fishing is an expensive endeavor for fishermen and they work hard to stay out of debt. Particularly relevant is the cost of gasoline, which must be paid to local middlemen regardless of having a productive fishing day. Thus, many times fishermen end up owing money to these middlemen and try to avoid going too much into debt by favoring near-shore trips.

Through our research we were able to reveal the spatial nature of fishing in Gigante. In addition, the expenses related to fishing add yet another aspect that contributes to the limited mobility of fishermen and the importance of coastal fishing grounds. Any changes in access to near shore waters, we argue, will impact local livelihoods.

Tourism has brought new job opportunities to Gigante. Gigante’s younger generations are finding jobs in local bars, construction, and nearby hotels. Many women find employment as housekeepers in several tourism projects and second homes along the coast. In addition, locals who already resided on the coast are trying to capture tourism revenues through food services, surf taxis and lodging. The rest of Gigante’s residents, however, have not been able to take direct advantage of the tourism boom. With regards to fishermen, a few job opportunities have opened for them in the tourism industry. These opportunities include taking surfers to surfing spots, water taxi services, and providing sport-fishing expeditions, usually through a tour operator. Moreover, direct partnerships between local fishermen and foreign investors have also occurred. However, other fishermen who have tried to partake in the tourism boom own their own have seen their aspirations crushed by tourist themselves. Many times tourists are not being willing to pay what local fishermen ask for, even when that price is well below what tourism operators charge. Thus, at first glance, tourism seems a plausible alternative for Gigante’s artisanal fishing force, but the reality is that only few families have been able to capitalize on this boom thus far. Tourist perceptions of local fishermen, among other factors, may impede fishermen from using tourism to diversify their economy.

“Big fish” Arrives in Gigante… and Wants the Ocean Protected

Tourism is burgeoning along Nicaragua’s southwestern Pacific Coast. Long miles of pristine and undeveloped coastlines quickly transformed the area into an attractive destination for western tourists. What started as a little-known spot among adventurous surfers quickly became a site of potential for tourism development. The changes taking place in Gigante recall the vivid descriptions of the changes that took place in the Brazilian village of Arembepe as described by Anthropologist Conrad Kottak in his book Assault of Paradise (1992). Indeed, assault on paradise might be the appropriate way to describe how large-scale tourism is quickly changing Gigante and the overall region. Guacalito de la Isla is the apotheosis of tourism development in the region. The 250 million USD, 1670-acre megaproject, is an oceanfront resort for affluent tourists; those who can afford to pay an average of 700 dollars per night. The resort is being developed by the Pellas, one of Nicaragua’s elite and most powerful families. One of the components of Guacalito de la Isla’s master plan is a marina from where a variety of marine recreational activities will be hosted in the surrounding waters, including sport fishing, snorkeling and diving right across from their property on an island know locally as La Anciana. La Anciana is also, however, one of the most productive fishing spots for the local fisheries.

Presumably because these water-based tourism activities overlap spatially with current fishing grounds of Gigante’s fishermen, stakeholders in the tourism industry have started using a discourse of declining stocks and unsustainable fishing practices that has served as context for the implementation of a Marine Protected Area (MPA). La Anciana MPA was approved in February of 2013 and includes the entire coastline owned by Guacalito de la Isla and extends 22 km off shore. Under these circumstances, we must question who benefits from the establishment of the MPA? At the very least, one needs to question if efforts are truly concentrated on supporting local livelihoods and protecting marine environments or, instead, is green discourse being used to conceal capitalistic interests amidst tourism growth in the area? This is precisely one of the arguments that we make in our article. We argue, supported by studies on MPAs worldwide, that these conservation schemes tend to fail when community well-being and a deep understanding of local fisheries and ecology are not part of the planning process. When MPAs are oriented towards favoring non-extractive activities such as tourism and livelihood options are not provided to locals, the end result is the transfer of control of resources from disempowered locals to those with the power to steer the outcomes of these struggles to their favor. The approval of La Anciana MPA is classic example of Paul Robbin’s (2011) Conservation and Control thesis of Political Ecology.

In post-revolutionary Nicaragua tourism development has been embraced as a way to inject foreign exchange into an ailing economy. Despite rapid growth of the sector, particularly along Nicaragua’s southwestern Pacific coast, little attention has been given to the impacts of this development on local producers. In Gigante tourism has started to compete with artisanal fisheries–an interaction that is beginning to forge new patterns of resource control that seem to favor those with power and money. Particularly the transfer of resource control through the creation of a Marine Protected Area may end up marginalizing local fishermen who depend on fisheries for their livelihood and in addition, may not be in a position to benefit from the growing tourism economy. Development creates winners and losers. Particularly threatening for the community of Gigante is the rapid and unregulated development that it is experiencing through tourism. The community does not have the time or resources to adapt to these rapid changes and the government fails to implement policies that protect local livelihoods and social structures from the fast-paced changes taking place. Paradoxically, the leaders of the revolution that empowered peasants in the 1970s to the 1980s have turned their back on their people and have reduced their ideology to political rhetoric ever since regaining power in 2007. Very little remains of the Sandinismo of Carlos Fonseca; most in Nicaragua will tell you this. Unregulated tourism development and the surrendering of national sovereignty for the construction of an Interoceanic Canal are just but two of the many examples of the clashes between global economic interests and local modes of subsistence taking place in Nicaragua that Carlos Fonseca fought to prevent.