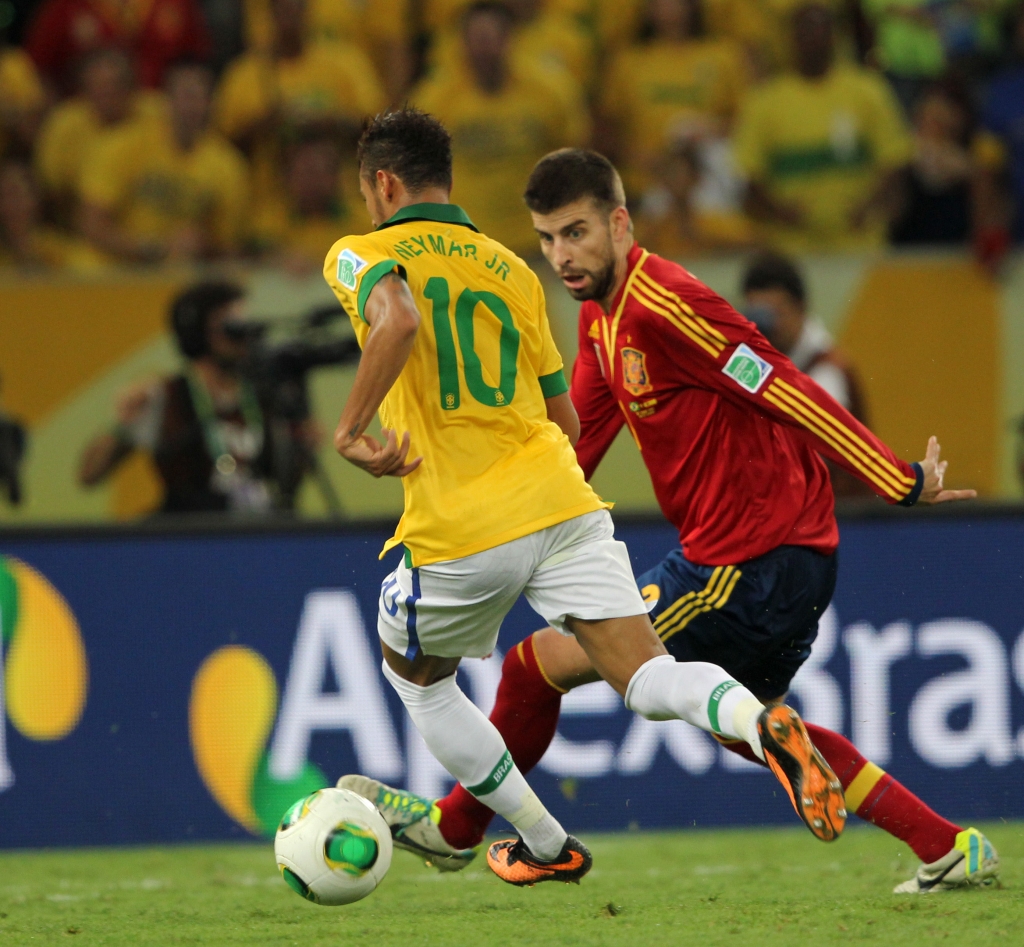 Football has been ingrained in Latin American culture since its introduction to the region in the late 19th and early 20th centuries. In some cases, football serves as a national identity (Brazil) or can be a terrifyingly powerful tool used by certain organizations (Colombia) (Politics of Football). Considering how dear the sport is to Latin Americans, I am surprised that there does not exist the maxim, “God, Family, Football.” However popular football may be, there is no matching the celebrity of the world’s greatest players. Latin America is fortunate enough to have given birth to so many, and so the five from the past usher in the five from the present. These number 10s used to be the kids who wore the number for their local clubs in admiration of Pelé and Maradona. Today, these five Latin American stars are those who inspire today’s generation of young footballers who will soon be on this list when these five become legends. Until that time comes, again in no particular order, these five are the currently the best Latin Americans that wear the iconic number 10.

James Rodríguez – This young Colombian took the 2014 FIFA World Cup by storm as he lead the Colombian national squad to the quarterfinals, as well as earning the individual accolades of the Golden Boot and the Goal of the Year against Uruguay. His six goals throughout the tournament were the most of any player in the tournament, and his self-volley against Uruguay in the round of 16 was voted as the most beautiful goal of the tournament.1 Rodríguez certainly gives Colombians a reason to be excited for the future.

Ronaldinho – Perhaps I am a bit biased placing Ronaldinho on this list, but having grown up playing soccer in a time where Ronaldinho, born Ronaldo de Assis Moreira, was the king of the pitch. During the 2006 FIFA World Cup, television advertisements were filled with Nike’s Jogo Bonito (beautiful game) advertisements, displaying the most beautiful skill and footwork of the world’s greatest footballers. Ronaldinho starred in many of those commercials, and we, as young teenage players, wanted to emulate what we had the privilege to witness. It was almost like magic the way the Brazilian would juggle (yes, juggle) the ball over and around defenders, and before you could even begin to comprehend what Ronaldinho was doing with his feet, head, back, or whatever body part he could use, the ball was already in the back of the net. He may be past his prime, but this number 10 is undoubtedly one of the best to wear the number for Brazil.

Lionel Messi – They say that no man is without flaw. You may be thinking that I’m about to say that Lionel Messi is the exception to the rule, but no. The young Argentine simply shrouds his mistakes with mountains of success. At the age of 24, Messi had already broken a more-than 50 year-old FC Barcelona scoring record held by César Rodríguez, and he does not seem like he is going to stop scoring any time soon.2 His goal-scoring abilities are matched only by the heart and amount of effort he puts into each play. In today’s game, you will more than likely see the better talents take dives toward the turf to draw penalties from the smallest bit of contact; not Messi. He is an honest player who gives the game the respect it deserves, and is a fitting Argentine number 10 to follow in the footsteps of Maradona.

Jorge Valdivia – Much like a particular Colombian on the previous list, Jorge Valdivia is not so much of a goalscorer, but rather a playmaker. The Chilean has a particular talent for making crisp passes between three, four, five defenders spread across several lines, as well as finding a previously undiscovered space to allow the attackers to move forward. With impeccable control of the ball with a first touch softer than everyone’s childhood teddy bear, Valdivia’s artistic play is nearly poetic, which is appropriate for a man who leads a nation from which the likes of Pablo Neruda and Nicanor Parra hail.

Neymar Júnior. – The next Brazilian superstar to wear number 10, Neymar embodies the style of play that is representative of players from the only Portuguese-speaking nation in Latin America: jogo bonito. He was playing professionally in Brazil at a very young age, being recruited by European power FC Barcelona and other major Spanish clubs in his early teen years. It wasn’t until the 2013/14 season that Neymar was shipped across the Atlantic to play for Barcelona alongside Lionel Messi. At 23, he has already established himself as one of the best players in the world, as well as the face of the Brazilian national squad.4 Unfortunately, young Neymar may have fallen victim to a recent trend popular among today’s superstars, as our Coordinating Editor related him to a “fish” for his flopping talents.

With that, the full list has been compiled, and some day these five will be those from the past who inspired a younger generation to be the best of tomorrow.