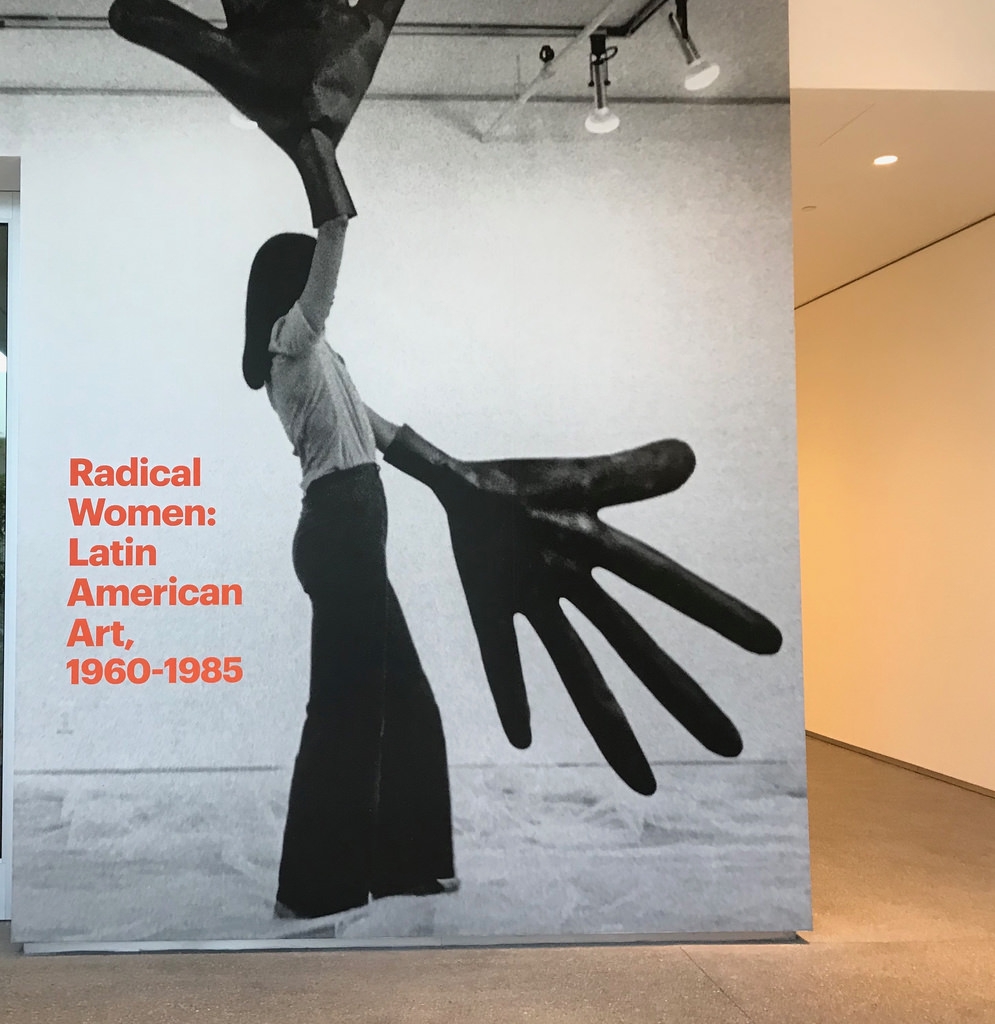 For many countries in Latin America the time period of 1960s through the early 1980s consisted of social and political unrest. Seen throughout the continent were revolutions for political change, movements for social change, U.S. interventions, and instability in governments and leaders. There was a sense of mistrust for the government and frustration for dominant classes, and with these two features came a sense of alienation that was felt amongst Latin American society--especially in minority groups (Johnson, 1964). Specifically, the political and social sentiments that were felt by Latin American women during the 1960s and 1980s were encapsulated in artistic mediums by female Latin American artists of the time. Some of this art was recently made into an exhibition called Radical Women: Latin American Art 1960-1985 at the Brooklyn Museum in NYC.

The Radical Women exhibit represents 15 countries, 123 artists, and 260 works of art. The exhibition tour schedule has Radical Women featured in the Hammer Museum in Los Angeles, the Brooklyn Museum in New York, and the Pinacoteca de São Paulo in São Paulo. The span of this exhibition tour is September 2017 through November 2018. The featured art is presented in a range of mediums. From photography to film to paintings and sculptures, almost every art form was experimented with in this showcase (Hammer Museum, 2017).

While some of the artists included in this exhibit are well-known, others are making their first debuts in a major art exhibit. The familiar artists include Beatriz González, Anna Maria Maiolino, and Lygia Pape. These artists are amongst the contemporary artists that are twentieth century emblems of unique and experimental art. Specifically, this exhibit focuses on the artists that were emerging in the 1960s, 70s, or 80s because they had created art that portrays the Latin American political and social struggles of the time. The curators, Cecilia Fajardo-Hill and Andrea Giunta, wanted to preserve and promote the history of this time period through the eyes women (NY Art Beat). The goal of this exhibition was not solely focused on feminist activism. The curators wanted to demonstrate feminism covertly and as an underlying message in the exhibit. Rather the goal was to explore the complicated experiences of women in this specific historical context and to give them a voice. For example, many of the artists did not label themselves explicitly as feminists (Brooklyn Museum and NY Art Beat). However, there are feminist interests that come through the art. These interests include: “bodily autonomy, oppressive social norms, gendered violence, and the environment” (NY Art Beat). Each of these aspects piece together certain parts of the society that were burdened in the 1960s-1980s.

In continuation, the representation of the woman in a restless society and the woman as a member of the political body were the main subjects in these art pieces. The curator, Andrea Giunta, commented on these topics, “Poetic and political, topics explored in the exhibition include self-portraiture, body landscape, and feminisms...These themes draw together the artworks across the national and geographic boundaries, making the case for parallel practices by artists often working in very different cultural conditions” (NY Art Beat Therefore, it is interesting to see how these artworks connect and contextualize the narratives of these women relative to their country and their countries internal problems.

For instance, included in the exhibit is a black and white photograph from 1977 called “La del plumero” or “The One with the Feather Duster” by Sandra Eleta (Panama). This work can be interpreted as the role Latinas played in society at the time. Specifically, this photo portrays the ideas of women as either the ‘traditional’ household woman or as a housekeeper in the workforce. Another artist, Sonia Gutiérrez (Colombia), explicitly created a series of art in the 1970s and 1980s that attacked the torture and persecution that was occurring in her country. An example is her piece, “Y con unos lazos me izaron” or “And They Lifted Me Up with Rope.” This work is in Gutiérrez’s pop art style, and depicts a faceless body hung by the feet by ropes. This specific work was inspired by the real case of Doctor Olga López. She was arrested with her daughter without a just cause. López was the one who the title was influenced by as she described the torture that she experienced when they arrested her by saying: “They wrapped my wrists in fabric, and they lifted me up with rope” (Brooklyn Museum, 2018). Overall, these works represent two common subjects of art: Latin American women and their role in society, and the impact of violence (as well as gendered violence) in many countries due to political unrest.

Also, another topic that was explored was the combination of gender and racial discrimination during a period of social and political unrest. For example, Paz Errazuriz (Chile) created the portrait “Evelyn” in 1982 with the goal of documenting and demonstrating the “marginalized communities under the oppressive Chilean dictatorship of 1973-90” (Brooklyn Museum, 2018). The focus group of Errazuriz were queer and transgender sex workers that worked either at La Palmera brothel in Santiago or the La Jauja brothel in Talca. Thus, her documentation explored minority experiences outside of solely females. Likewise, the expansion of creating art based on the experiences of not only Latin American women, but also women of the Afro-Latino community. For instance, in 1978, Victoria Santa Cruz (Peru) published “Me gritaron negra” or “They Shouted Black at Me.” This work displays the discrimination she faced as a child and her development into a women who embraced her race and gender with great pride. Finally, the ideas of gender and race were experimented the work done by Mexican artist, Yolanda Andrade’s piece.  Her art often focused on the role of the women and other minorities in the streetlife of Mexico City. She was featured for her gelatin silver print from 1984 of an Afro-Latina woman participating in a gay pride march in Mexico City (Brooklyn Museum, 2018).

Thus, not only were Latin American women often a subject in the art in Radical Women, but also other impacted minorities were represented in the art as well. Thus, Radical Women promoted the general circumstances of an unstable society through a range of art styles. However, this exhibit demonstrates the specific experiences of Latinas, Afro-Latinas, and the queer community during the 1960s-1980s. The art was devoted to demonstrating the violence, discrimination, political and social movements, and dictatorships that shaped their daily life.