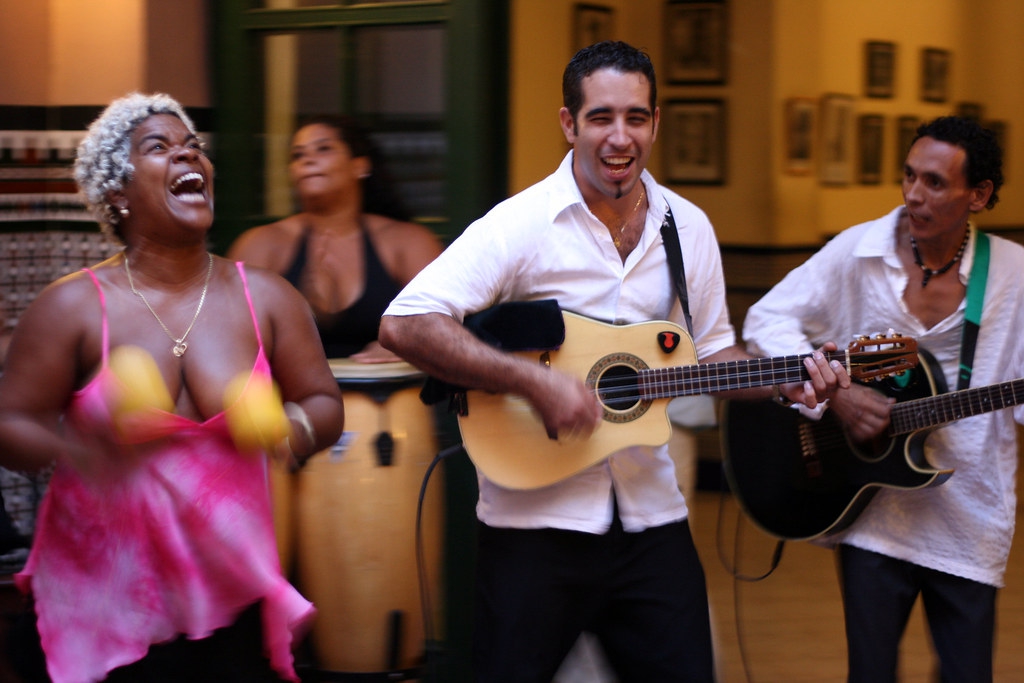 By labelling salsa music as a Latin American genre, we are implying that this genre originated in Latin America when it in fact emerged in the barrios of East Harlem and the Bronx during the 1970s. Nuyoricans. or Puerto Ricans from New York, are credited today with having the greatest influence on salsa music. Salsa is predominantly derived from African music reflecting the significance of the African diaspora in Latin American and Latinx cultural traditions. The expressions of these transnational identities were negotiated by the popular music industry in the United States during the first salsa boom, resulting in long-lasting misconceptions of what salsa music epitomizes.

What is salsa music? Its definition remains contested in discourse today and there is still no definite answer today. Latin American music was gaining popularity in the U.S. for decades before salsa music was recognized. Jazz has long since been incorporated into Latinx music spaces such as dance halls, jazz clubs, pubs, and has influenced mambo, boogaloo, Latin jazz, and eventually salsa within the U.S. (PBS, 2009). Jazz provided a foundation that centered improvisation in barrio music like salsa. Besides the influences of African American jazz, Johnny Pacheco, founder of Fania-All Stars and pioneer of salsa music, describes salsa as “Cuban music, its roots are mambo, rhumba, son montuno, guaracha, guaguanco, guajira, cha cha cha. . .it has other Latin American influences from my native island of [the] Dominican Republic, it has merengue. It also has Puerto Rican influences with charanga and Columbian as well with cumbia” (Pachecho, 2005). Salsa is also influenced by Bomba and Plena from Puerto Rico.

The term salsa can be found on records prior to 1975, the most widely accepted date that salsa music was labelled as such. However, the term was randomly used on albums, in titles and performances. During the ‘70s, salsa was nothing more than a descriptor: “con salsa,” playing with soul, flavor, fire, or as Fania All-Stars MC Izzy Sanabia would say “y ahora con ustedes con el sabor latino que ponen mas salsa que pescao”(Cuevas, 2015). The earliest debate about the term was about distinguishing salsa not as another Latin American rhythm but as a. . .concept? reality? A political movement? (Waxer, 2002).

It is not a rhythm it’s a metaphor, it’s a wonderful metaphor for a Cuban based music performed and upheld and celebrated by Puerto Ricans in New York that has a mixture of jazz so salsa was a very convenient term a way of describing music that had certainly a tropical, Latin flavor and it happened to be played by Puerto Ricans, Dominicans, and Cubans but it has this inclusion of jazz so there’s a sort of fusion aspect to it (Felix, et. al., 2014).

Not everyone agreed with this metaphor. Sal Cuevas, a Nuyorican bassist for Fania Records (and Fania All-Stars) believes that the term salsa was officialized by the people while artists like Tito Puente resented the title and saw it as an insult to the contributions of Cuban artists in New York (Cuevas, 2015). Because the music has many Cuban specific contributions, older artists found it hard to get past labeling the music as anything but Cuban music, and especially not as a term used “when you cook for me and make rice and beans” (Felix, et. al., 2014). Besides its presence in uniquely street/home settings in the barrio, it took a while for salsa, both the term and genre, to catch on.

Why mix all of these musical elements into one? This musical mixture is a unification of African derived music fixed to the literal representation of people in the barrio. The Bronx is filled with people of diverse interests, everyday culture, and familial influences as Willie Colón describes here:

The hood was mostly Latino immigrants, not like El Barrio that was almost 100% Puerto Rican. The Bronx was more like Queens, a blend of many Latino nationalities. After school I would hang at my friend Michael’s house till Abuela and my mom would get home from work. Michael’s mother was Edna Davidson, a beautiful Black Panameña with green eyes. There would be jam sessions in the summer, which the remaining white residents resented. Fernando, a Dominican from across street, would bring his fiddle. Papín, a Cuban, would bring his bass. Ti Joe, an African American, would bring his trumpet and Moe, Fernan, Toro, all Puerto Ricans, would play congas and sing coro. . .The walls on the block would be covered with posters that were glued one over the other as time passed. These would have pictures of Tito Puente or Machito or Tito Rodriguez or Joe Cuba or Charlie Palmieri. These were our heroes (Colon, 2010).

From this memory, the barrio was a healthy mixture of newly immigrated individuals persisting connections to the islands while younger generations both respected and altered those traditions to better represent themselves. Therefore, the stylistic choice and innovation of music became transnational. The music of Tito Puente, Pete Rodriguez, and the early music of Celia Cruz was played alongside R&B, punk, jazz, funk, and rock–this was the Nuyorican barrio playlist.

Salsa was distinctly from ‘el barrio’–the barrio experience belonged to salsa. It was a lifestyle, “el alma del barrio,” an identity that was unique to its Nuyorican and Latinx residents (Manuel, 2007). This was street-oriented music. This was inner-city youth (Diaz, 2014). Barrio music was authenticity and power, a genre of refuge for the weekends, a defiance of white-American culture (Berrios-Miranda, 2003). Marisol Berrios-Miranda in her article “Salsa Music as Expressive Liberation, at the Cultural Crossroads of the 1970s” suggests that the expression of Latinx identities through salsa was due to the need for cultural refuge and freedom, and a parallel to the racial/ethnic pride movements manifesting at the time. This suggests that salsa music is not simply freedom of expression through music but was a necessity for Nuyoricans and other Latinx from the barrio during this time (Berrios-Miranda, 2003).

What did this barrio music sound like? There is a musical shift in instrumentation and stylistic quirks separate from the aforementioned genres that is uniquely salsa–that is, musicianship and innovation. In “The Book of Salsa: A Chronicle of Urban Music from the Caribbean to New York City” written by Venezuelan TV producer Cesar Miguel Rondón chronicles how few musicians were formally trained, and most played by ear–characteristics that are deemed undesirable and inappropriate by the popular music industry. Yet the unpolished sound of the brass and trombone in particular became the validation that their realities had authentic value. Untrained and unpolished is not to say that their music was simple (Rondón, et. al., 2008). In fact, this sound was so personal, and the community dance style so particular it was one of the first elements easily lost once outside of the barrio (Lipsky, 2017). Johnny Pacheco could be found delivering records from his car (Contreras, 2014). Reuben Blades’ songs were powerful expressions of barrio loan sharks in “Te Estan Buscando,” and included gangster references in “Pedro Navaja,” and were odes to the monotonous working-class routine in “Pablo Pueblo” (Manuel, 2007). Although the barrio was most important to the beginnings of salsa music, negative connotations labelled barrio music as musica de la calle and deemed musica de la gene baja.

At first, it was quite difficult for the music industry to acknowledge salsa music. Prejudice was distinctly tied to anything relating to the barrio identity which acted as a double-edged sword. On the one side, the barrio identity brings political awareness to the underprivileged, on the other it is too easily stereotyped and dismissed (Rondón, et. al., 2008). Salsa music was created during a period charged by civil rights dialogue and created by minority groups living in predominantly poor communities in New York City, not by people trying to be “hot” and “exotic.” The music industry essentially “othered” early salsa musicians by making clear distinctions of what non-white Latin American music should sound like. We can parallel the rise of salsa to the rise of the “world music.” The category of world music arose from European music festivals and TV shows became mainstream in the ‘70s. In order to establish the validity of its popular music, the music at the European festivals needed a direct opposite. As a result, any other kind of music, not-so-coincidentally of minority groups, became ‘world music’ (Velasquez, 2019).

Like the generalization of world music, salsa music eventually became a pan-Latinx genre. This negotiation of transnational identities into a globalized form continues the erasure of Afro-descendent cultural contributions in Latin music. To Willie Colón, salsa became the first pan-Latinx genre unifying diverse musical and cultural elements of Latinx across New York and Latin America. Yet, in order to present the genre as desirable to the greater public, or non-Latinx, salsa needed to shift away from its early origins. This conflicting loyalty of salsa music’s image is imperative to understanding the differences between salsa music before and after the boom when salsa became commercial and trendy (Rondón, et.al., 2008). The music industry wanted the realness of the music without the reality.

The industry began profiting off of the Nuyorican/Latinx experience without explicitly honoring its African descendent influences resulting in the negotiation of the diverse nature of salsa. This was achieved in several ways: 1) underrepresenting Latinx musicians in orchestras as well as no mention of salsa music as predominantly African-derived, 2) purposely removing the image, and value of the Barrio from salsa because it was lower class, and undesirable to white people, 3) marketing toward white people by tokenizing Latin Americans over Afro-Latinos. 4) creating a strict, rigid, and particular sound, with lists of characteristics that erased improvisation from recordings–a major part of Latin American and African musical traditions. Salsa music became stereotyped, exoticized, glamorized, and commodified.

The salsa boom was in fact not a boom for the people, it was the death of an honest genre. Capitalism infiltrated salsa music during and after its boom in the ‘70s (Blum, 1978). The industry “rather than taking care of salsa as an authentic expression, began to busy itself with dressing it up in the trendy forms of the moment” (Rondón, et.al., 2008). The industry was able to maintain its Euro-centricity by favoring white and white-Latinx over Afro-Latinx composers and musicians (Blum, 1978). Where salsa before the salsa boom was careful to discuss the diversity of the barrio population, salsa during and after the boom minimally rallied for the respect its pioneers deserved. Why was the music industry not able to represent salsa music as a U.S-American genre without cherry-picking and recreating its sound? Why must Latin music be staged to the public in a diluted form? (Blum, 1978). After the 1970s salsa boom, salsa began globalizing inspiring people in Latin Americans to “remix” salsa to their own countries taste. What we should think of when we listen to salsa are the narratives of under-recognized composers, history, and musical elements as the sum of various components from African diasporas spanning throughout Latin America, the Caribbean, and the United States.

Alba, Luis. (2002). The History of Salsa & other Latin dances. http://latino.si.edu/virtualgallery/sabor/SalsaResearchResources/articles/The%20History%20of%20Salsa%20Dancing2.htm

Music of Puerto Rico. (2015). Know us by the song we sing. http://www.musicofpuertorico.com/index.php/genre/salsa/