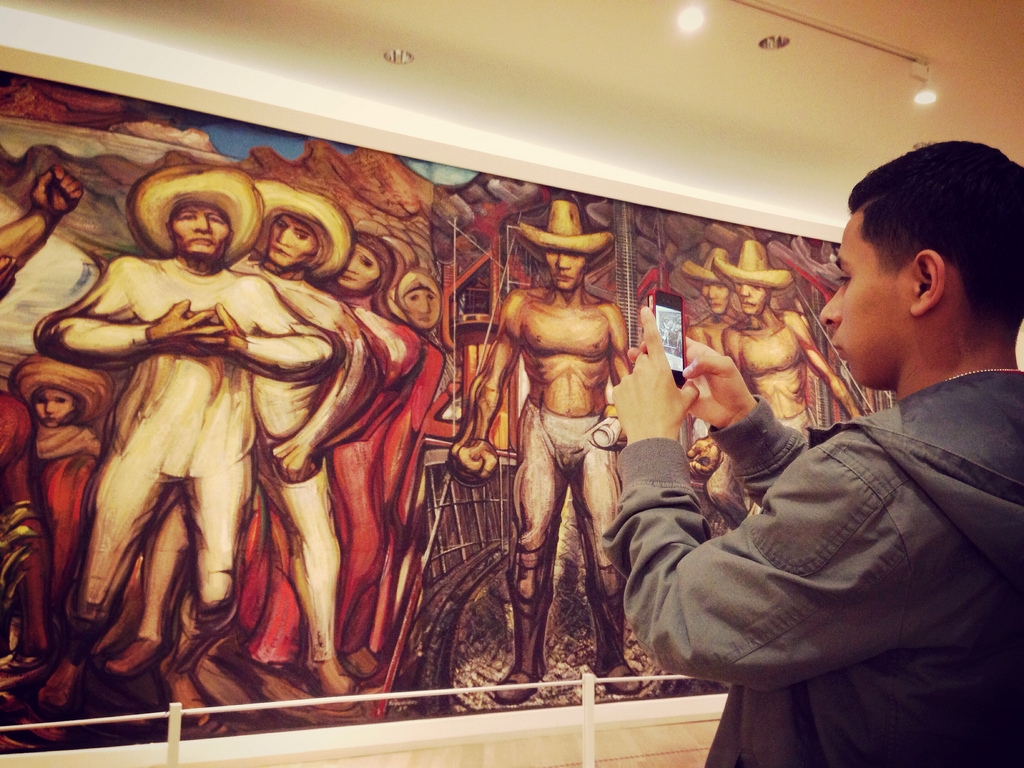 When Americans think of cultural products of Mexico, they normally mention items such as tacos, mariachi bands, and the sombrero. However, the  country has much more to present than the wonderful yet sometimes superficial artifacts widely known in the United States. One example is the visual arts, and more specifically, muralism.

Generally speaking, murals are paintings done on walls or large spaces, and their origins precede the conquest of Mexico. The Olmecs painted murals which the Spanish redirected towards promoting Christian doctrine and evangelization (Kenny, 2006). In the mid-1800s, Mexican painter Juan Cordero became well-known for his murals on the walls and arches in churches. However, Mexican Muralism as an internationally-recognized movement began in the 1920s on the coattails of the Mexican Revolution and the new social, political and economic order it initiated. Prior to the Revolution, the rule of Porfirio Diaz (known as the Porfiriato) emphasized euro-centric values that ignored the indigenous and mestizo heritage of Mexico. Thus, after a successful popular revolution, many called for more rights and recognition of indigenous and mestizo Mexicans.

Artists at this momentous time seized the opportunity to depict a more egalitarian and history-honoring Mexico. Diego Rivera,  David Alfaro Siqueiros, and José Clemente Orozco were already established as painters and actively discussed the intersection of art and social critiques. In 1921, the new government recognized the need to educate the mostly illiterate population and at the same time promote the ideals of the revolution. The Secretary of Education José Vasconcelos suggested using murals to depict the true history and glory of Mexico as a way to educate and inspire the country. He commissioned works by Rivera, Siqueiros and Orozco (known as “los tres grandes,” the three great ones) and the rest is history.

In general, the most well known murals fall under the theme of national pride and history of the Mexican people. However, each artist brought his own experiences, perspectives, and ideals to the table. One of the unifying perspectives of all three artists is their left-leaning beliefs that emphasized the communist ideals of egalitarianism and the rising up of the worker masses. Their works emphasize these beliefs that were sometimes criticized by the government and those who commissioned them to paint.

Siqueiros was the youngest and most radically left-leaning of the three. This can be seen in his focus on the proletarian masses featured in many of his works, like the one seen below. 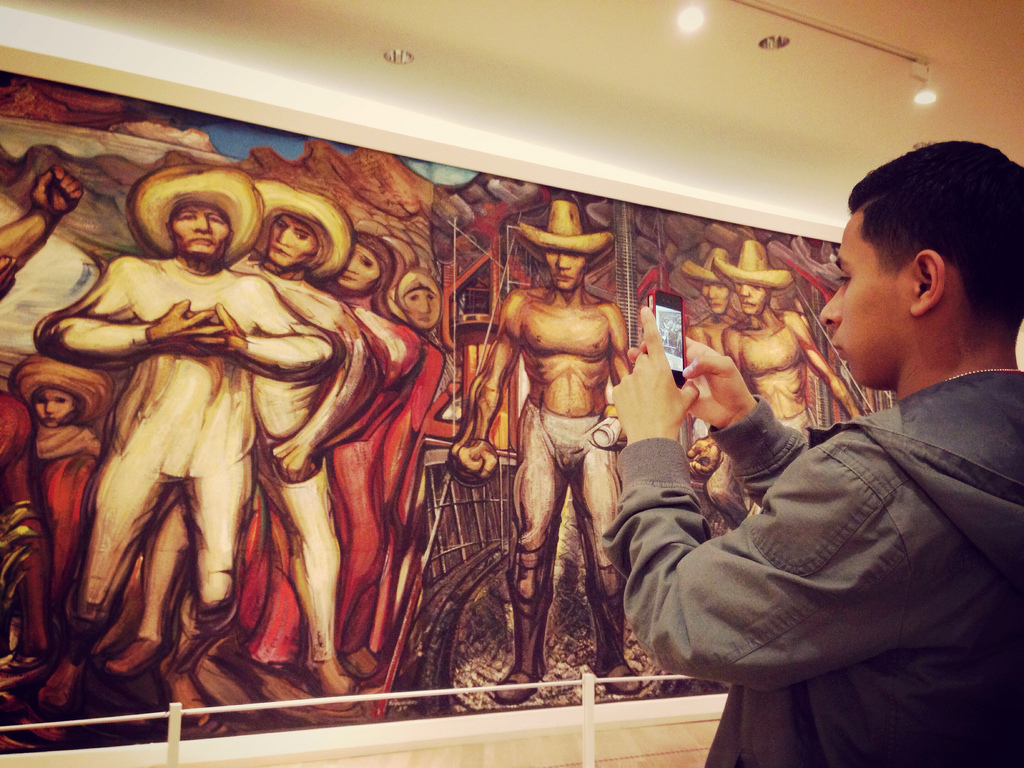 He also participated in the revolution supporting the forces of Venustiano Carranza, and depicted soldiers often. His works are frequently characterized as “futurist,” evident in the rapid, sweeping, bold lines and the use of modern enamels, machinery and other elements related to technology (Cambell). 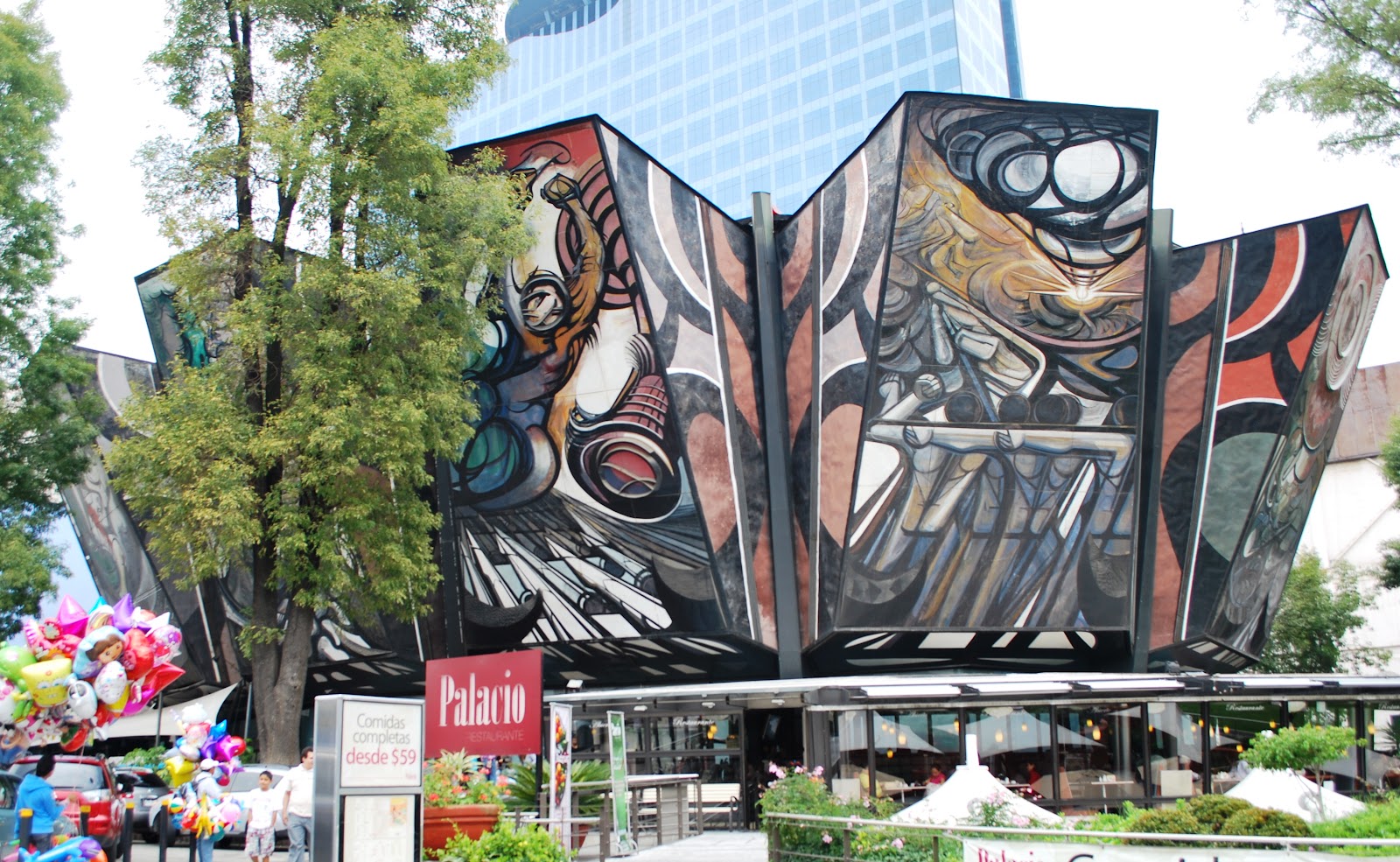 Orozco is known for his dreary and negative depiction of oppression in his works, focusing on the human suffering of the revolution and a fear for the technological advancements of “progress” for the future. His works show the "expressionist use of color, slashing lines, and parodic distortions of the human figure” that are very distinctive (Cambell, 2003). 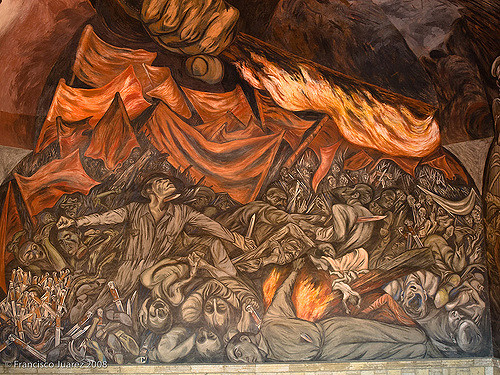 Like other muralists, Orozco condemned the Spanish in his artwork as destroyers of indigenous culture, but he did paint scenes of some Spanish priests that worked to defend and support the indigenous peoples. Unlike the other two, Orozco did not glorify the Mexican Revolution, but rather focused on the havoc it wreaked on society. As a result, many of his works are seen as controversial or disrespectful.

Rivera is considered the most famous of “los tres grandes” and also the most traditional in his European-influenced style of painting. He focused on varying themes such as the ancient pre-columbian world and daily life in Mexico and is best known for promoting different views on the country’s indigenous past. He did this through painting various scenes from Mexico’s history that tie together and unify the many different groups into the new Mexico established at the time (Pomade, 2007). 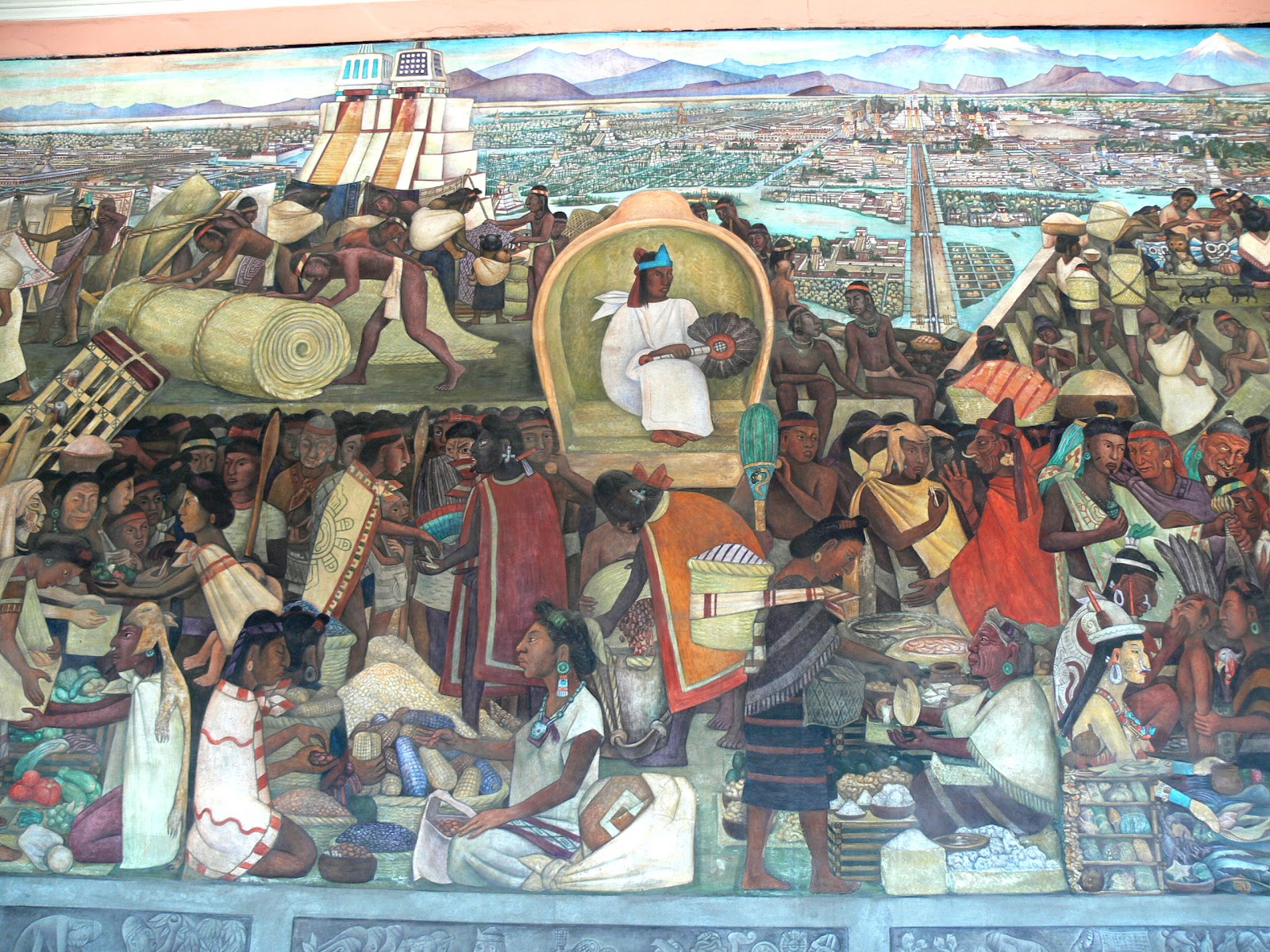 It is interesting to note that of the three, Rivera was the only artist to not be present in Mexico during the revolution, having spent his time in Europe. Other muralists were known to have criticized him for this fact, and one can perceive the lack of focus on the fighting itself that is heavily conveyed by Siqueiros and Orozco in their paintings. 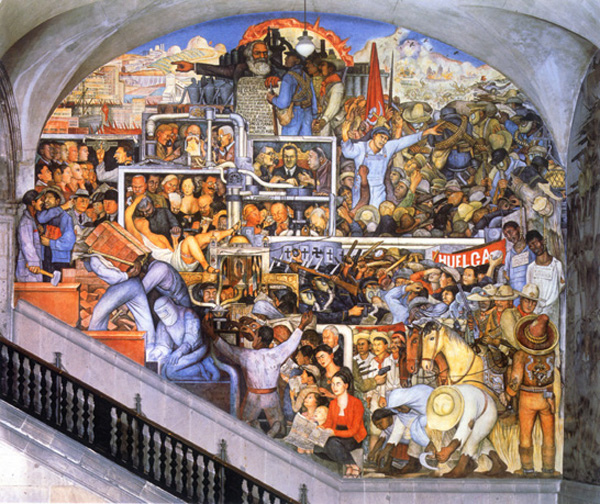 Additionally, he is infamous for having painted a mural for the Rockefeller family in 1934 that featured communist leader Vladimir Lenin and was swiftly destroyed by the family. The full story about it can be found here: (Keyes, 2014). (http://www.npr.org/2014/03/09/287745199/destroyed-by-rockefellers-mural-trespassed-on-political-vision ) 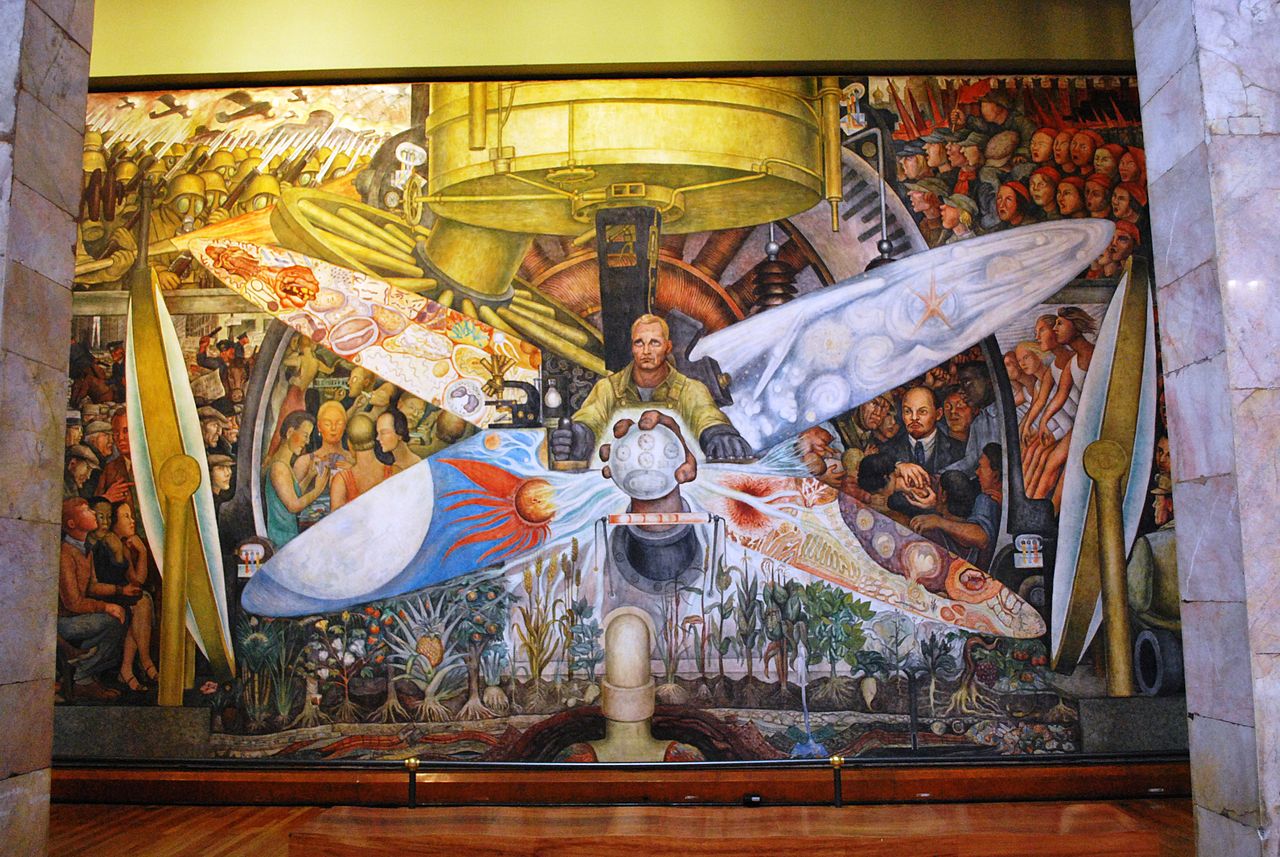 The works of the “tres grandes” can still be seen today and have had a profound impact on how murals can be used to convey meaning and ideas. For many decades though, these works seemed confined to Mexico and although popular, did not spur on mural movements in other countries. This would not happen until the Chicano movement of the 1960s that focused on extending the rights and empowering Mexican Americans. During this period, many universities began Chicano Studies programs that sought to enrich their students with a thorough knowledge of contemporary Mexican art, and so programs in the Southwestern and Midwestern United States brought mural art back into the spotlight (Goldman, 127).

As a result, one can find vibrant murals that investigate identity, indigenismo, pre-colombian society, and the fight for farmers rights in many US cities. Below are examples from Los Angeles, San Diego, El Paso, and Austin. In San Diego, the Chicano Park is home to the country's largest collection of outdoor murals with over 72 works produced since 1973 and this past month was designated as a national historic landmark (Logan, 2012). 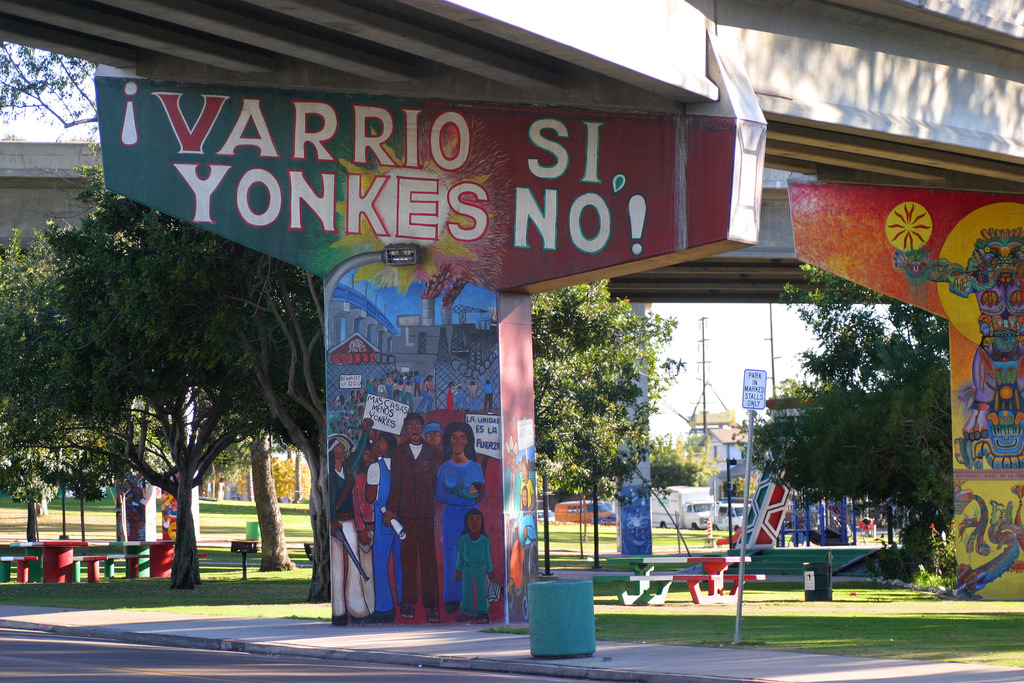 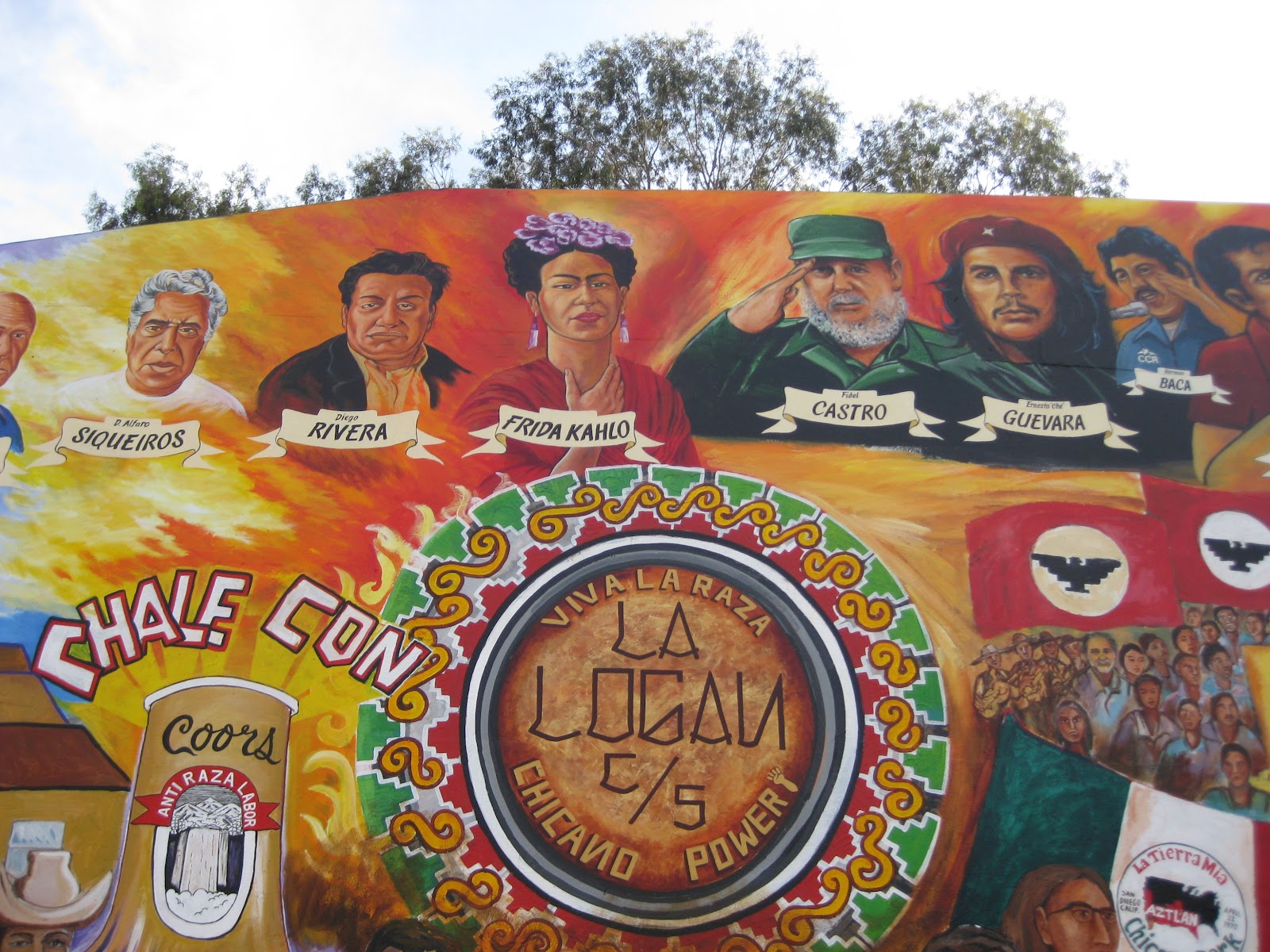 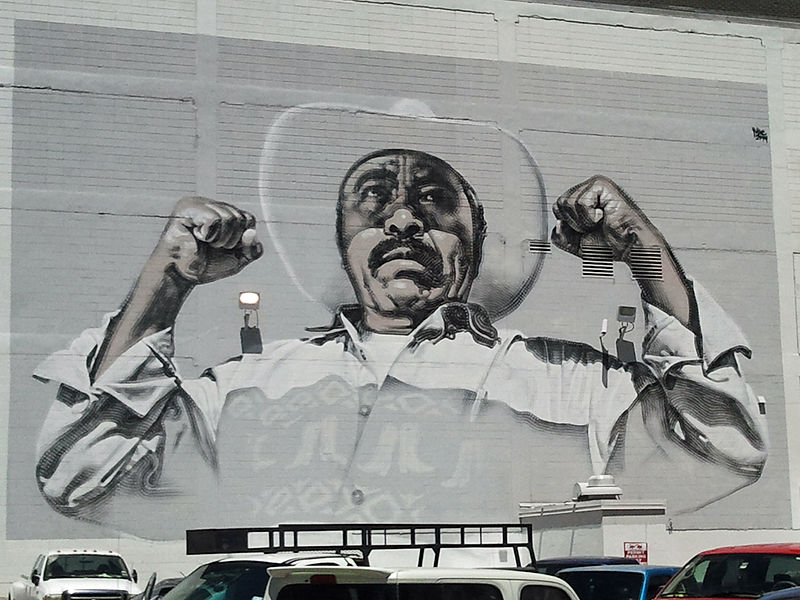 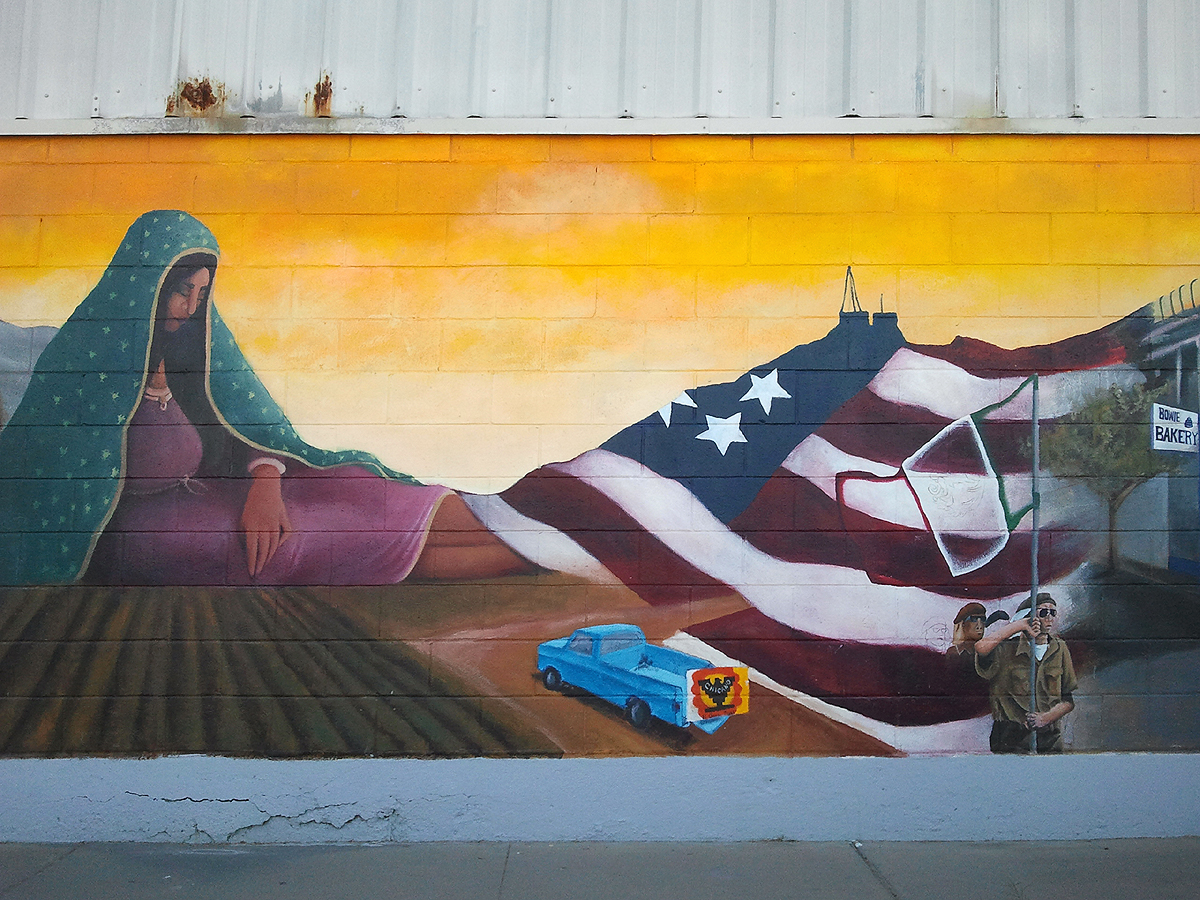 Clearly deriving its inspiration from Mexican Muralism, Chicano Murals in the U.S. are a brilliant depiction of different causes, leaders, struggles, and beliefs by Mexican-Americans that still hold relevance to this day.