The Marimba in Guatemala: The Once Muted Instrument is Heard Again 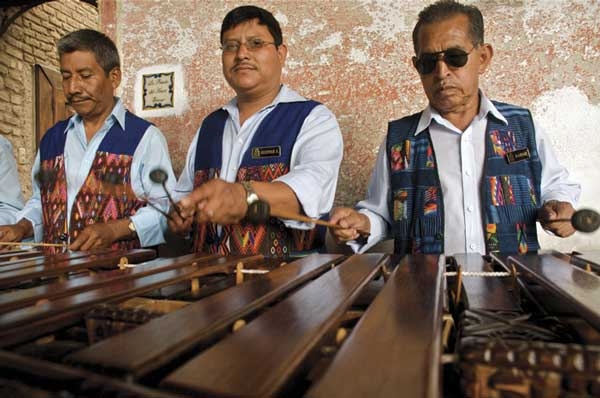 Sweet sounds of a wooden instrument ringing throughout the airport caught my attention as I got off my flight in Guatemala City in the summer of 2016. As I turned the corner, I saw the source of this joyful music that breathed happiness being played on a large wooden xylophone-looking instrument, which I later learned was called a marimba, by a group of Guatemalan men underneath a large sign that said, “Bienvenidos a Guatemala” (Welcome to Guatemala).

If you ever find yourself walking through the streets of Guatemala, you will most likely find men playing the marimba either for tourists, at a festival or fiesta, or for their own pleasure. It is beloved by Guatemalans, especially the ones who are of Maya heritage. Named Guatemala’s national instrument in 19781, the marimba has not only brought joy to its people but also played a large role in helping to shape indigenous identity.

There are many ideas as to how the marimba came to be: some say it was originated in Maya culture, others say that the marimba originated elsewhere like Africa and was brought over during the slave trade. Regardless of its the origins, the marimba is no less a part of Guatemalan culture and identity2.

The earliest records reveal that the marimba has been played by the Maya in Mesoamerica since 16803. It was used for ceremonial dancing, religious and social celebration, and usually played by men4. However, during the Spanish conquest in Central America and Guatemala in the 16th and 17th century, being Maya indigenous was not seen as virtuous. There were many types of repression imposed upon the indigenous people of Guatemala by the Spanish: they were not allowed to dress in their traditional trajes (clothing), they could not practice their religion, nor were they allowed to practice their cultural activities like playing the marimba. Instead of practicing their culture, the indigenous of Guatemala were enslaved by the conquistadors to work on the farms. And while many of the indigenous fought back, the odds were against them as they were exposed to diseases brought over by the Spanish, and the Spanish had more effective weapons as well.

Aside from having the indigenous population work on farms, the Spanish also sought to “share” Christianity with the indigenous Maya. This included prohibiting the Maya from playing their instruments, like the marimba, because of its importance in Maya rituals. The Maya, however, were not deterred from playing the marimba and would continue to play in secret rituals hidden away from the Spanish1.

After three centuries of colonization, Guatemala gained its independence in 18215. However, the following government, though run by Guatemalans, brought violence and oppression against the indigenous especially in the period between 1960-1996 named “la violencia” (the violence) or otherwise known as the Guatemalan Civil War5. In the 1980s, the killings of the Maya population were so prevalent that it was named a genocide. Similar to the actions of the Spanish, the Guatemalan government banned indigenous music gatherings in 1981 with disappearances of marimba players1.

In December 1996, peace accords were reached between the government and the guerilla organization that addressed the resettlement of the millions displaced during the war, rights for indigenous peoples and women, and many other issues—some of which still have yet to be resvolved5.