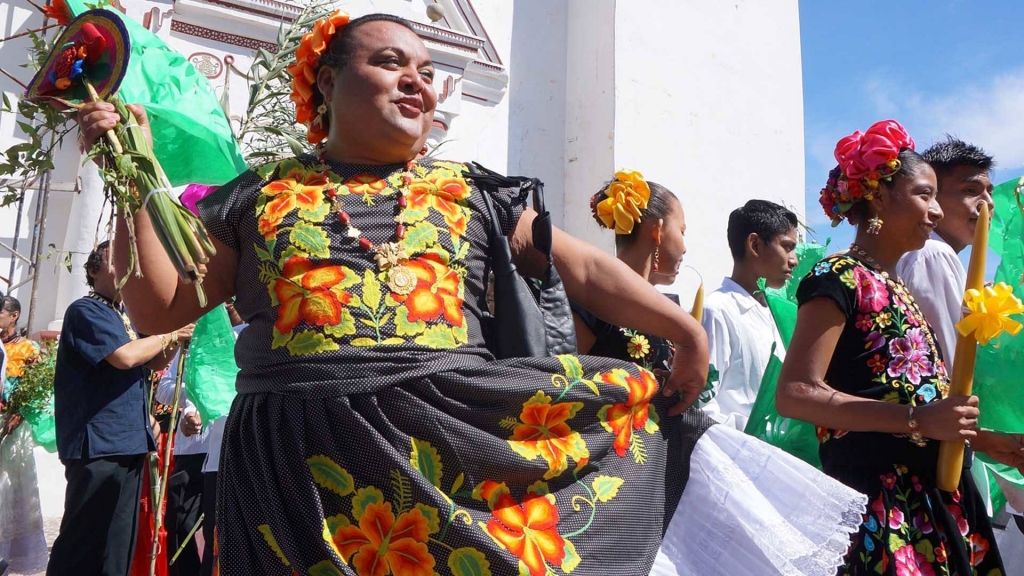 In the southern state of Oaxaca, in the town of Juchitán, lives indigenous Zapotec men, women, and muxes. Juchitán is a small town where a man wearing a dress would not necessarily be called transgender--there, they could also be considered a muxe (MOO-shay).  Muxes are neither man nor woman, they are identified as a separate category of gender, some call it a third gender. Generally, muxes are assigned as male at birth, but dress or act in a feminine way. Many muxes take on the feminine role of the household, where they clean, cook, and even are expected to take care of their elderly parents. In earlier times, muxes would wear vestidas (dresses) or pintada1 (male clothing with makeup), however, in more recent times, most muxes wear vestidas. In any case, muxes are so much more than just a man in women’s clothing. In the Zapotec culture, being muxe is something to be admired.

Traditionally, the muxes are admired for their skills in “embroidery, hairstyles, crafts, and cooking2". Most of their respect comes from the fact that muxes take care of their parents in their old age1.  The muxes are celebrated in the Zapotec culture, and this is apparent in Juchitán, where every year there is a four-day long festival dedicated to honor the members of the third gender. The festival, “La Vela de las Auténticas Intrépidas Buscadoras del Peligró” (The Celebration of the Bold Seekers of Danger), has been around for over four decades. What once began as a small party among older muxes to celebrate their old age has turned into a lavish “pageant” that attracts over 5,000 attendees3.

Though the muxes have been celebrated for decades, they still face hardships within the Zapotec culture. Some families consider having a muxe in the family as a blessing, while others disapprove of that sort of “behavior4”. Moreover muxes do experience discrimination, but due to their ambiguous identity they can face less discrimination than men who identify as homosexual or transgendered women. You may see muxes in predominantly female dominated positions like nursing, teaching, tailoring, or event planning. Whereas on the other hand, muxes have crossed over to more male dominated careers, like when “one muxe, Amaranta Gómez Regalado, ran for Mexico’s congress in 20033”.

A practice that has been around before the Spanish Conquest of Mexico in the 15th century, the muxes are also seen as a symbol of indigenous resilience. Oaxaca, Mexico is home to the country’s largest and most diverse indigenous populations4. The muxe way of life is not only revered because of their role in the Zapotec culture, but also because the custom has still prevailed even after the Spanish colonial rule.

The complexities of the muxes are hard to define, just like how it is hard to define any gender. There is no one set of characteristics that a muxe can fit into. Most of the world sees gender as a binary concept--meaning only two genders5. In the United States, traditionally we have two genders: men and women, and those two genders have specific characteristics attributed to them depending on the culture. For example, women are expected to be motherly, caring, or emotionally sensitive. This is contrary to men, who are pressured to be more emotionally unavailable, strong, or career-driven. Gender is a concept that we often think of as natural, but in reality, our gender is socially constructed from the environment around us. Who was the one to tell us that men should be tough or “manly”? Or who was the person who said that women should be caring?

Gender is fluid and is a spectrum, not a binary. There is something to be learned from the muxes and many other cultures that also have third genders such as the two-spirit of the Navajo or the Hijra in India. The muxes, and the many other cultures around the world, can show the people in the United States that our gender norms are not what define us, and that instead of rejecting difference, we should celebrate them.