Giving a Voice to the Voiceless: Street Art as a Form of Political Protest 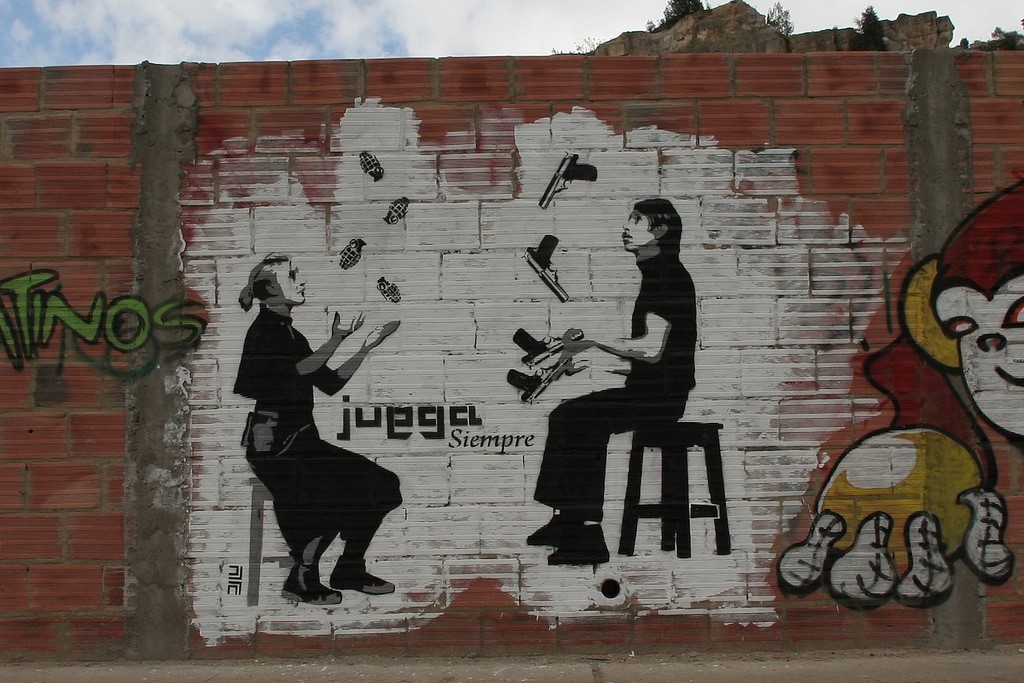 Military dictatorships in most Latin American countries during the 1970s suppressed the population, but out of it grew a movement that remains strong. People who were typically voiceless, began to use walls as a microphone for their political and social expressions. While street art is not always politically linked, the movement grew from the need to not be silenced anymore. The movement rapidly grew with youth during the ‘80s who used their political frustration and artistic ability to communicate with the government and their fellow citizens to start conversations that were once silenced by dictatorships.1

While some use the term ‘graffiti,’ others prefer the use of the phrase ‘street art’ but all can distinguish between “taggers” and the artists. Regardless of what it is called, these forms of expression can create global conversations. Under the magnifying glass of the 2014 FIFA World Cup, the Brazilian government was attacked for their lack of interest and care when dealing with the favelas, or slums, to create massive stadiums. While much was written about this conflict, the creation of Paulo Ito’s street art captures the sentiment without using any words.2The power of a starving Brazilian child with nothing to eat but a soccer ball grew into a symbol for the social and political clash that was occurring.

In the case of Ito, and many others, the art bypasses elite only access to create widespread exposure. Generally accepted as a form of art, it is normal to see someone painting a sidewall in broad daylight in Brazil, Argentina, or Colombia. For example in Argentina, with the owners’ permission to paint, artists are free to express anything they please. In addition, some street murals have even been subsidized by local government or private companies in Argentina.3 The movement has revamped many old buildings and factories in cities that are just now beginning to recover from the economic distress of neoliberalism. While this form of expression has become more or less accepted by the government, many street artists still use their paint as a political weapon.

Stencils are a powerful tool used to reach wider audiences and engage more viewers. The reproducibility of stencils can carry the message to more walls, in more neighborhoods.4 One of the most well-known, politicallycharged groups is Vomito Attack, which formed in response to the 2001 economic crash in Argentina. Their use of stencils, was deployed to send their messages of anti-consumerism and discontent for political corruption. The group created their own fictitious political party called, “Poder, Corrupción y Mentiras” (power, corruption, and lies), which drew attention to the corruption in the Argentine government.5Today in Colombia, artist DJ Lu uses stencils to bring light to the systemic violence in Colombian society by spraying ironic and playful war images on blank spaces. His work is a direct attack on the government claiming that the progress and safety are being achieved.4

Today in most large cities in South America the colorful streets and history of graffiti have become a form of tourism. In Buenos Aires, Rio de Janeiro, São Paulo, and Bogota tourists can have walking or bike tours to learn about the vibrant political protests through street art, as well as murals done solely as a form of art. This has opened up opportunities for these street artists to make a living from their art. Buenos Aires now has a gallery established by graffitimundo, which connects the street artists to opportunities presenting work, leading workshops, and promotion of the art scene in Latin America.6 Evolving from the right to freely express public opinion, street art continues to leave its imprint on the streets of Latin American cities as a means of expression.