Frida at The Frick: A Snapshot into Two Exhibitions 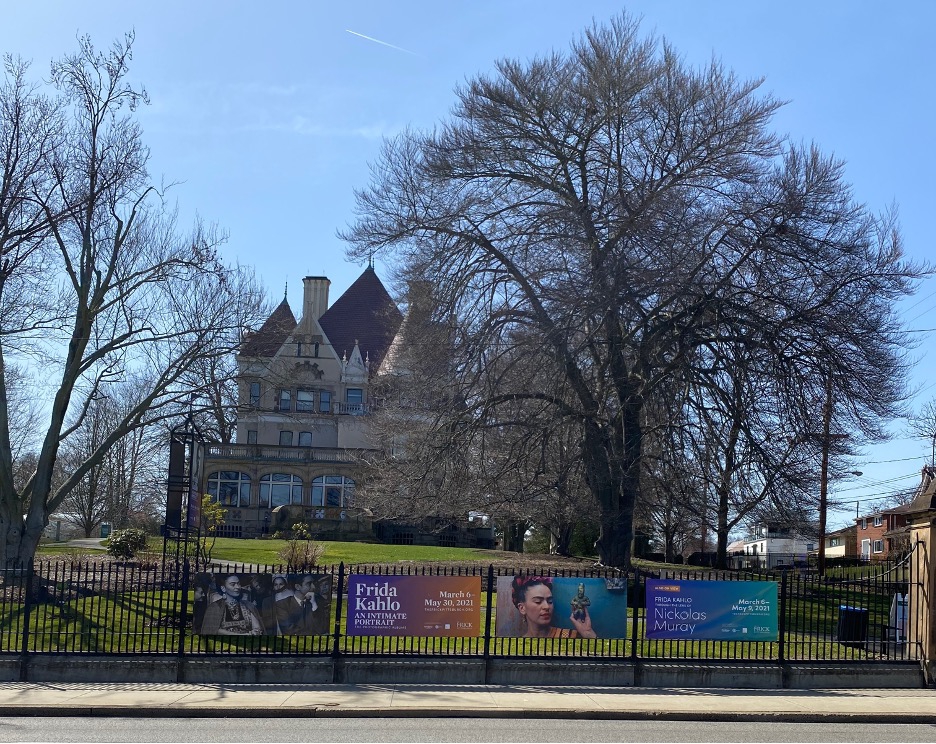 Frida Kahlo – An Intimate Portrait: The Photographic Albums will be at The Frick Pittsburgh through May 30th.

Frida Kahlo: Through the Lens of Nikolas Muray will be at The Frick Pittsburgh through May 9th.

Frida Kahlo’s life was full of love and tragedy. She used to give out photos of herself, sort of like trading cards, to people she met so that they would remember her and what she looked like. She is one of Mexico’s most famous artists. The art Frida Kahlo was most famous for, her paintings, she only began after a car crash almost killed her and left her with injures that would last her lifetime. Photography is an art medium that Frida Kahlo is very connected to and never considered in relation to. This is the focus of two exhibitions at The Frick Art Museum, Frida Kahlo–An Intimate Portrait: The Photographic Albums and Frida Kahlo: Through the Lens of Nikolas Muray.

The main exhibition, Frida Kahlo–An Intimate Portrait: The Photographic Albums, highlights 115 photographs selected by Vicente Wolf, a professional interior designer, from his private collection of 450. It was acquired by the museum through the organizer art2art. In contrast, the pop-up exhibit, Frida Kahlo: Through the Lens of Nikolas Muraywas obtained through less conventional means. The Manager of Exhibitions & Registrar, Melanie Groves, had noticed that the Reading Public Museum in Reading, Pennsylvania was showing an exhibition with a focus on Frida Kahlo. While looking into the exhibit, she saw that the photographs were planned to travel to Italy. Knowing that this might not happen because of the pandemic, Groves reached out to the museum and expressed interest in having them appear at The Frick Pittsburgh. In addition to initiating contact for the Nikolas Muray exhibit, Groves is additionally responsible for the design and arrangement of the exhibitions (M. Groves, personal communication, March 22, 2021). 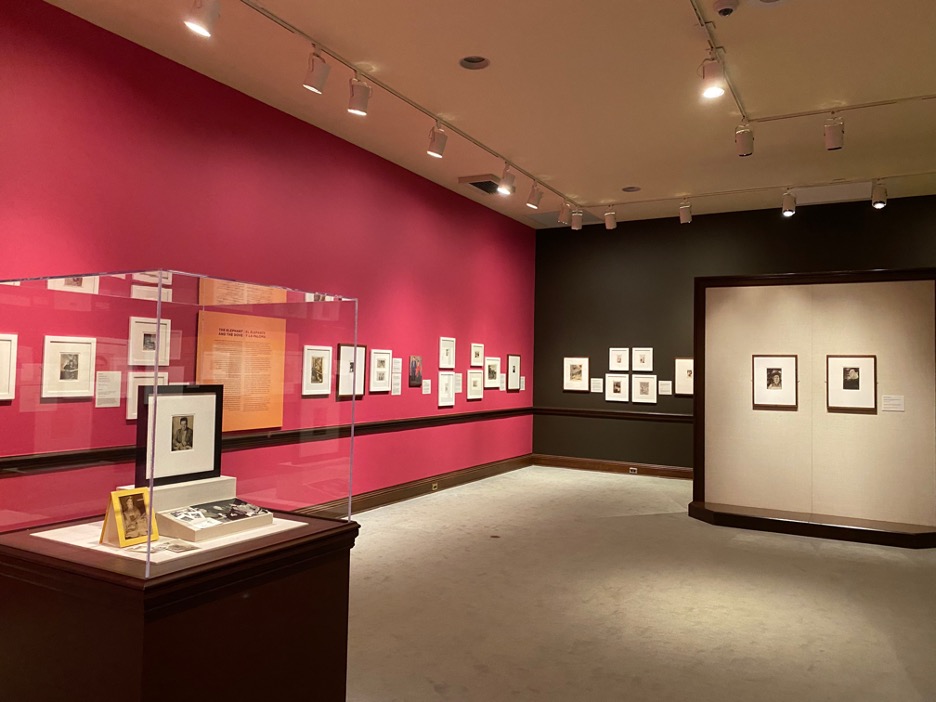 Despite not being known for photography, Frida Kahlo was quite connected to the medium. Her relationship with it begins from childhood as her father, Guillermo Kahlo, was a photographer. He was commissioned by the Mexican government for his photography and took many photos of architecture, industry and portraits. As Kahlo was Guillermo’s favorite, she would join her father on a lot of his outings, guarding the camera in case her father fell during a epileptic episode. Frida additionally assisted him in the dark room during the developing process. At home, she was his favorite subject and spent a lot of time in front the camera. Later in life, Frida would make sure to keep a camera in her house (M. Groves, personal communication, March 22, 2021).

The exhibit is full of photographs of Frida Kahlo with her friends and family, taken by her friends and family—many of whom happened to be professional photographers. The particulars of most of the photographs are unknown, but the wealth of information that they provide is priceless. These pictures were important to Frida Kahlo. Upon her death, the photographs were left to her favorite doctor, and then in the possession of other private hands before Vicente Wolf purchased them. Most of these photographs have never been on display at this scale before (M. Groves, personal communication, March 22, 2021). 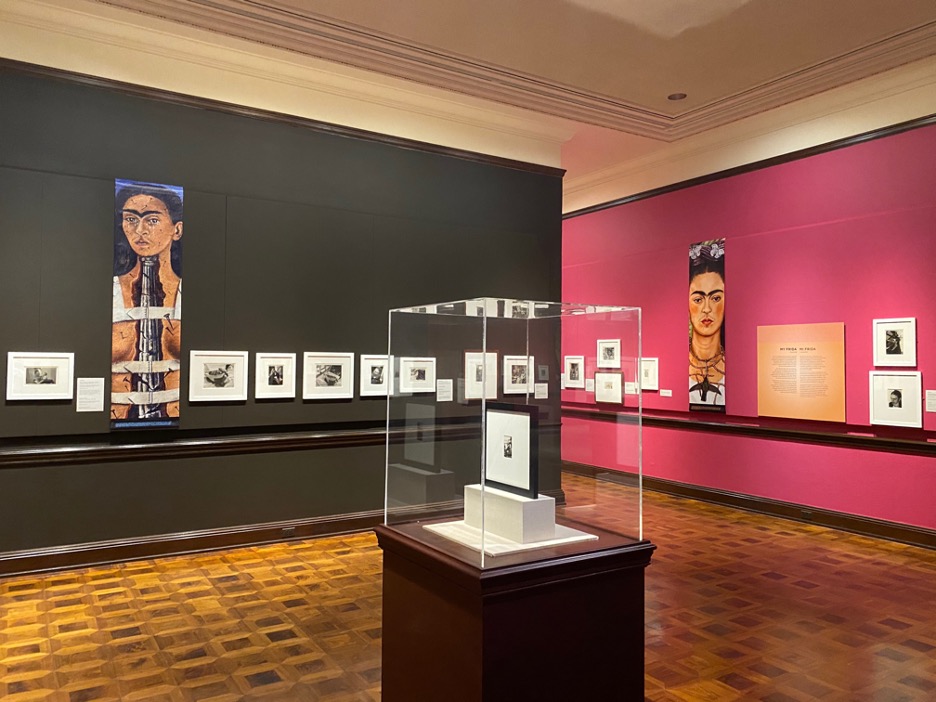 Many of the photographs have tears and scratches—evidence of the informality of the art and the personal nature of this exhibit. They were never cataloged meticulously and only some of the pictures have descriptions written on the back, leaving some the faces to be left unknown. Many of the photos were taken by Kahlo’s father, close companions like Lucienne Bloch, and lovers like Nikolas Muray. And still, many of the photographers remain unknown. The exhibit highlights all of the juxtapositions of Frida Kahlo and her life and the design of the exhibition emphasizes this with the contrast between the exhibit’s pink and black walls.

There is a photograph of Kahlo’s sister Christina and Diego together. The picture begs the question, did she keep this picture because was of the two people she loved the most in the world, or because a hatred that these two betrayed her by having an affair. Another of the photographs shows Frida and Diego seated with two wealthy American women. It captures the political nature of her dress and the paradox of Diego, a staunch communist, having to rely on the funding of affluent families.

The photos highlight the pain she was in and the love that she experienced. Some pictures are candid, while others are posed. There are photos of Frida Kahlo’s feminine side as well as her masculine side. One can see how she used traditional Mexican clothing as a celebration of her heritage, a political statement and a disguise all at the same time. These pictures are also more personal in the sense that not many showcase her as an artist. There are pictures of Diego Rivera in the process of creating his art, but only a few of her. Personal aspects are also seen that copies or online scans would never be able to reproduce. One can see the lipstick stain from Frida Kahlo kissing the back an image of Diego Rivera (below) and a Frankenstein doodle that she sketched on the back of a photo. 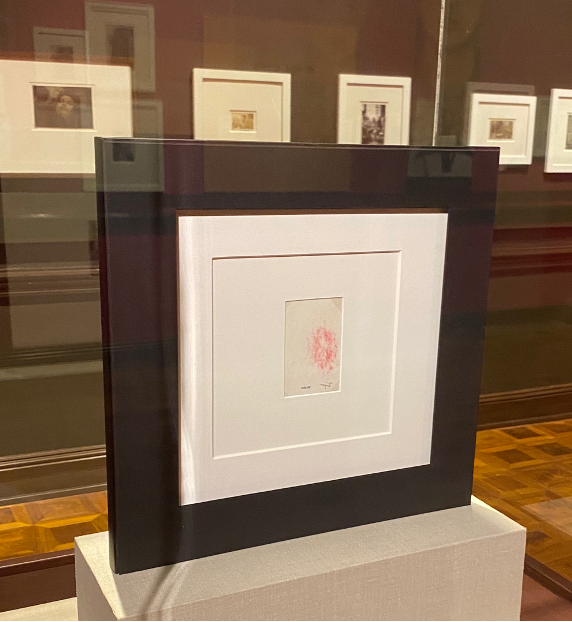 The pop-exhibition, Frida Kahlo: Through the Lens of Nikolas Muray, is a bit different. After the 115 photographs in black-and-white, the Muray photos surprise the viewer with color. The modern prints from the original negatives have a psychological effect. They remind the mind that Frida Kahlo is not that far gone from the world today. While in this portion of the exhibit photography of the prints is not allowed because of copyright reasons, there is a backdrop for visitors to take a Frida Kahlo inspired photo of themselves. This personal photo portion will allow visitors to keep a piece of the exhibition with them. M. Groves, personal communication, March 22, 2021). Frida Kahlo once said that she painted flowers so they would not die, perhaps these photos and her self-portraits are so that she would not.

A special thank you to Alex Taylor and Melanie Groves for the opportunity to get an inside look at the exhibition.