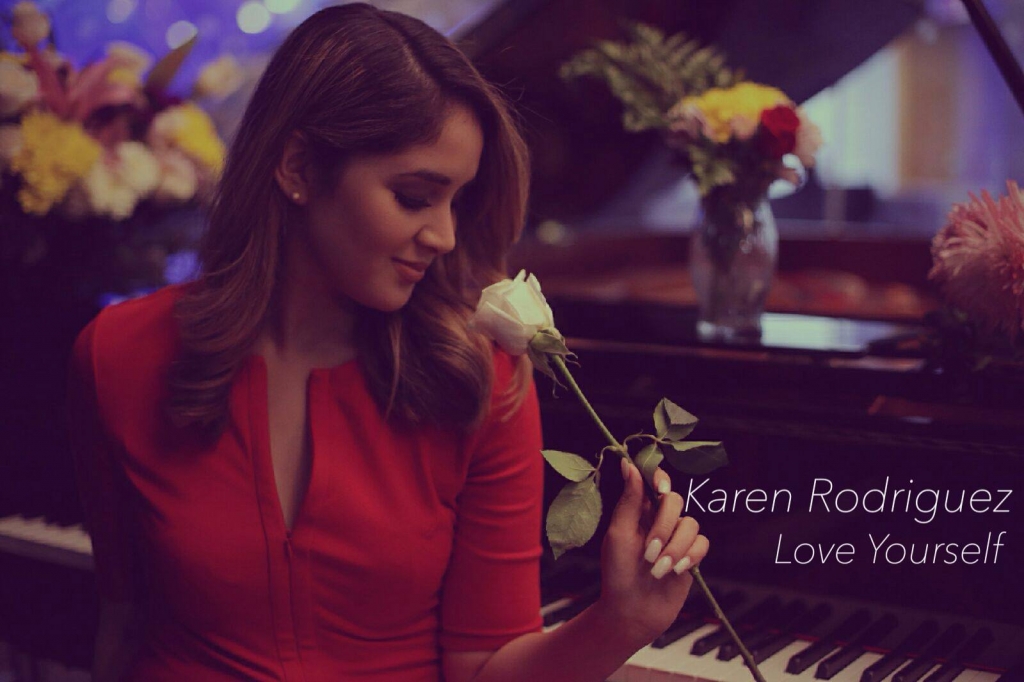 Historically for Latino singers there were only two pathways to success in the United States: sing in English to tap into the existing market or sing in Spanish to grow a fan base until popularity has risen enough to switch over to singing in English. In 2013, artists like Pitbull, Prince Royce, and Romeo Santos were making it in the music industry by following a third path. Using their bilingual abilities, these United States born artists are able to sing in both English and Spanish, often in the same song. By making bilingual lyrics clear and extensive in both languages, songs gain popularity in English and Spanish broadcast. These artists have a growing market of Latino youth who grow up bilingual and bicultural and look to artists who sing about things they can relate to.1

Karen Rodriguez is an up and coming singer following this third path who skillfully intersects American pop culture with her Peruvian and Dominican roots by translating and performing covers of new American pop songs to Spanish. In 2010, Karen became the first bilingual finalist on American Idol, which helped to put her talent in the national spotlight. Recently translating and covering songs like “Hello” by Adele, and “Love Yourself” by Justin Bieber, have proven her capabilities. She grew up with a culture of working hard, but her success in the music industry is

more than just hard work, it is talent in a unique niche of music. Karen’s music is heavily impacted by her identity. She proudly states, “Being born in the United States but having parents that have that Latino culture influences me a lot: in my decisions, in my life, and in my music, it is part of me and my creativity and I owe a lot to that. It’s very important to acknowledge that.” Even deeper than that, her Latina roots have made her the artist and person she is today, “from being able to speak Spanish, to the music, to the type of food that I love to eat, just having that warm heart, and also just having it engrained in us that we are just such hard workers. There is a long history of who we are and that our great grandparents and parents are just really hard workers, and they always look for the better things in life and want to provide a better life for their families.”

While growing up, Karen’s family had a focus on school and making a life for themselves. Her mother immigrated from Peru and her father from the Dominican Republic, so there was a minor disconnect between Karen’s childhood and that of her parents. Her mother wanted to be a singer in Peru, “but her parents were completely against it because in Peru those weren’t great opportunities. You didn’t see a potential career from being a singer.” But Karen says that “over here you can do anything and there is such a vast platform of opportunities.” The options relating to singing in the United States have allowed Karen to fully dedicate herself as a performer. Growing up Karen was able to have a totally bilingual childhood, which sometimes presented challenges. “Not being able to always speak to my mom in English was challenging, because I would want to say something in English that I knew she might not understand and therefore had to go back to Spanish. There was that type of small disconnect, but we have everything else that makes us who we are and unique.  We still dance to the same music and eat the same food. That was the only thing, coming from different backgrounds.”

As a child, Karen got to understand more about where her mother was from and the culture that influenced her when she visited Peru. Karen reflected on the experience saying, “I felt disconnected from a lot of the material things from back home and I was able to appreciate that culture, which was just completely different than what I had grown up with in the United States. The music was different, the food was different; it was just very real.” Traveling to Peru and playing with other kids, in a very different but typical way, was eye opening and humbling for Karen because she “really got to experience for the first time how different people live in different parts of the world.” Feeling disconnected from her dad’s side of the family and culture, Karen had always wanted to go to the Dominican Republic. Once her music career began providing her performing opportunities, Karen was asked to perform in the Dominican Republic and the experience brought her closer to her dad’s side of the family giving her the chance to experience the culture and the people. “It was good to just be there and be there with a purpose.”

Karen did not hesitate to note that the intersection of American pop culture with Latino culture in the United States is important. For her the roots of translating popular English songs into Spanish are much more rooted in history than her music. It goes back to before, you even had Celia Cruz singing I Will Survive in Spanish and also Gloria and Selena doing it.”Today almost a quarter of youth are Latino and many are bilingual.1 Rodriguez sees a need for pioneers across multiple areas being proud and keeping alive the importance of being bilingual. As she says, “So we need for that to be known and not only in music, but in Hollywood and politics, we need more people out there representing our cultures and making them known. I can contribute to that by the art and just hoping that my music speaks for that.” Karen’s passion for translating pop culture songs into Spanish comes from speaking English and Spanish fluently. “In general,  as an artist I see myself singing in Spanish and English. I love writing these amazing songs that have been inspired by the American culture but so that Spanish speakers can understand them. I take a song and I think about it and I say it would sound really amazing in Spanish.” A song that Karen talks about with a lot of pride is her cover of “Hello” by Adele. “The Adele cover is such a powerful song and there wasn’t anything that sounded like that in Spanish so I wanted to create my own. And it is also a representation of the type of songs I would want to do in the future as an artist.” As she starts to write her own original songs, translating and performing covers is an important way to continue making music and have people become more familiar with her music.

Karen has worked with the National Hispanic Foundation for the Arts in creating awareness of Latinos in the entertainment business. In response to being asked if she has ever been treated differently in the music industry because of being Latina, she responded that she has never felt anything very negative. Stating, “ but rather I have an advantage because I am able to do a whole bunch of different things and tap into so many types of music and different experiences and opportunities.” Being on American Idol was the only time she feels like she was looked at differently in her career. As the first bilingual finalist, she faced some pushback from viewers because it was the first time that Spanish came onto American Idol and into their living rooms. Karen remembers, “To be a part of that and kind of be that pioneer was a little bit scary because I didn’t know how people were going to react, but it was well received by the majority. There were some people saying this is America, this isn’t Mexican Idol, but that is just ignorance. I just didn’t pay attention to it.” Karen deliberately notes that the United States is a melting pot of cultures and backgrounds and she is happy to be able to use her voice to spread the Spanish language. Always putting her passion and energy into her performances Karen notes that, “I feel like there is such a great advantage in being Latino because we have a really strong presence, we’re becoming an even stronger presence, including this whole platform of the music and the arts. I am really proud to have a little part in this history.”

As Karen Rodriguez’s career begins to take off, she has big ambitions for the future. She positively remarks, “I want to win Grammys, I want the chance to sell out arenas, and have my own tour and constantly create music and produce albums.” Writing for other artists, as well as her own music is one of the most important parts of the process for her. Coming back to her roots, Karen says that, “What’s important to me is also just bringing awareness and being a voice of Latinos. The way I plan to do that is through my music and my voice by just giving it all on that stage every time I perform.” Karen hopes to continue writing songs and become a well recognized voice, “I will continue translating these covers because people definitely want to hear more music like that. But I will also attempt to write original songs that you could hear, perhaps like Taylor Swift, Justin Bieber, Beyoncé, or Adele.