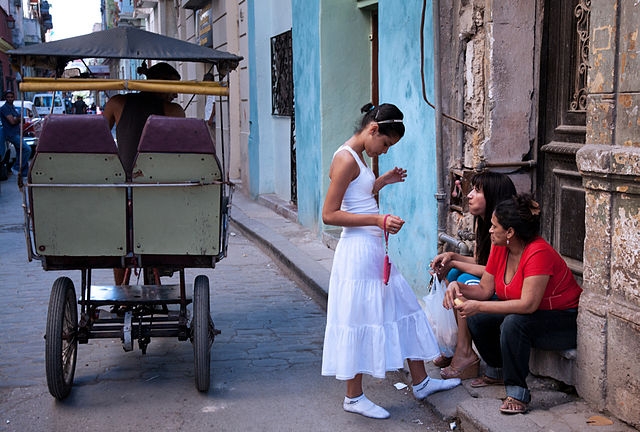 Walking down the cracked sidewalks of a hot, palm frond-shaded street in Vedado, Havana’s western upper-middle class neighborhood, you pass two women. One of them, younger and taller, is dressed entirely in white—from her white umbrella and white hair wrap down to her white high-heeled shoes. When she notices you staring at her trailing white dress, she smiles and looks down. Her older companion speaks loudly and emphatically to her as they pass you by.

The sight was one I saw frequently during my time in Havana, where the public presence of Santería, a syncretic religion, has grown stronger and stronger during recent years in Cuba. During their first week of formal initiation into the Santería faith, men and women must wear all white and be accompanied by a religious elder each time they go out in public. One of the fastest-growing religions in Cuba, Santería (known formally as the Regla de Ocha or the religion of Lucumí) has endured through centuries of oppression, first by Spanish slave-owners, then by imperial rule, and most recently by Castro’s anti-religious government. In the few years since Fidel Castro formally stepped down from power, Santería’s popularity in Cuba has increased steeply. Fidel’s recent death could mark a new era for the religion as it continues to grow and become a defining part of the island nation’s vibrant culture.

Santería, a Spanish word meaning “worship of the saints,” incorporates elements of African religion with Catholicism. Santería is not necessarily the single uniform product of a some-of-this, some-of-that mixing of the two religions; rather, it is the reconciling of both of them, the attitude that both represent a different perspective on the same faith. Upon arriving in the Caribbean, African slaves from the Yoruba region were forced to convert to Catholicism by the Spanish. In secret, the slaves continued to practice their own religion in tandem with Catholicism. For example, Santa Barbara is seen as the Catholic counterpart of Changó, a Lucumí Orisha and one of Santería’s most popular orishas, the semi-divine spirits who help humans communicate with Olodumare, the supreme power and creator of the world.

Out of the years of evolution through oral tradition, a unique form of Santería emerged as one of the dominant religions in Cuban society. Because Santería exists alongside and in harmony with Catholicism, and many practitioners of Santería actively consider themselves Catholic, it is hard to say with any precision how many Cubans are involved in Santería. However, estimations suggest that up to 80% of Cubans are connected with Santería, through formal or informal worship or through consultation with religious elders. And Santería is not by any means Cuba’s only syncretic religion. On the contrary, other religions with connections to Yoruba traditions as well as to aspects of Christianity are abundant in Cuba. But Santería, which many Cubans consider the most joyful, loving, and empowering religion among these, attracts far more followers than other syncretic religions, many of which are dark, esoteric, and/or exclusively male.

While the orishas in Santería share many characteristics that in Christianity are typically associated with saints—including that most of them used to be human, and that after dying they became sacred—the orishas are in fact much more dynamic than Christian saints tend to be portrayed. Members of the Santería faith (and there are various levels of membership) each choose a single orisha to whom they devote their lives. They learn from their stories, live by their teachings, and wear their colors on certain days of the year. During my time in Cuba, I saw the characters of the orishas represented most often in folkloric dance, as well as in films and art. Among the most popular orishas are the lord of fire, Changó, whose colors are red and white; the old man and the child, Elegguá, represented in red and black; the mother of the sea, Yemayá, represented by blue and white; and Oshún, the youngest orisha, the ruler of the rivers and the cultivator of love, who always appears in the brightest yellow. Changó and Oshún are the two most famous examples of syncretization in Santería. As Changó is linked to Santa Barbara, Oshún is considered another face of the Virgin of Charity of El Cobre. The orishas are not perfect—Eleggúa can be mischievous; Changó can be prideful and easily seduced. But each orisha has a fully fleshed out personality known through the multitudes of traditional stories about them. This makes it easier for their human followers to develop a personal relationship with them through sharing food, consulting them for advice, and celebrating their days of the week and year.

Many Cubans find it significant, and some even say auspicious, that Fidel Castro was buried on December 4th, the feast day of Santa Barbara and as such a day of national celebration of Changó. While Fidel insisted that religion had no place in his life or his country, some have seen him as blessed by the orishas—for instance, when a dove, a symbol of Oshún, landed on his shoulder as he gave a speech shortly after the Revolution triumphed in 1959. Though Fidel repressed Santería, in coming years it will surely become a key representation of Cuba’s cultural identity.