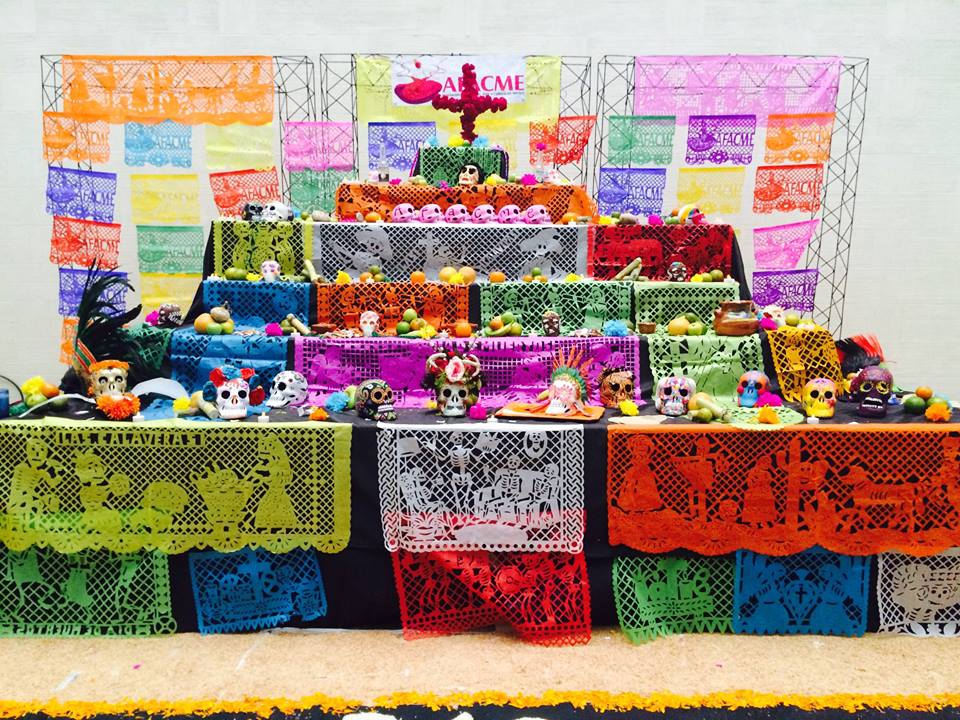 This past weekend, Mexico, and other Latin American countries including, Belize, Ecuador, Guatemala and Peru, celebrated the holiday Día de los Muertos or “Day of the Dead” as a cultural tradition to honor and remember those that have died. The Mexican holiday is marked by customs including face painting, skeletons and skulls, papel picado or colorful paper flowers, and the most important; the creation of an ofrenda. An ofrenda is an altar that displays the images and special items of loved ones that have passed in order to celebrate them. The Day of the Dead is a three day holiday that begins on October 31st and ends on November 2nd, celebrating the lives of the dead throughout. During the holiday, families come together to pray, visit graves, and commemorate the spirits of the dead. The Day of the Dead helps demonstrate the difference in the way that some Mexicans view death in their culture. Death is seen as a natural part of life, and Día de los Muertos acts as a celebration of their lives by the traditions of festivals, parties, and the preparation of the favorite foods and drinks of those that have died. In many areas, some believe that on Día de los Muertos the spirits of their deceased relatives and friends are able to join in these celebrations.

However, this years Día de los Muertos was different in Mexico, as Mexican women followed these celebrations with their own Día de las Muertas, meaning “Day of the Dead Women”. The original holiday, Día de los Muertos, includes the first day, as a specific celebration for children that have died. Although similar, Dia de las Muertas includes a more somber social justice approach, calling upon the Mexican society to recognize the vast amount of women that die due to the hands of men. Día de las Muertas included protests and marches that aimed to bring attention to the vast amount of femicide that occurs in Mexico. Femicide is the gender-based murder of women and girls by men. According to BBC World, “Latin America is home to 14 of the 25 countries with the highest rates of femicide in the world, and 98% of gender-related killings go unprosecuted” (BBC World 2019). Women in Mexico have been some of the most vocal in the world in trying to gain recognition for the social problem. According to the United Nations, femicide is “a crime that claims the lives of 12 women a day in Latin America” (UN 2018). In Mexico, femicide kills an average of nine women a day (Orsi 2019). It is more than likely that the high rates of femicide in Latin America are correlated with the cultural aspect; machismo. Machismo is a term often associated with Latin American men, that refers to hyper aggressive masculinity. According to Reuters, in Mexico alone in 2016, there were 2,735 homicides of women, which “was the second-highest figure of any year since 1990” (Solomon 2017). This figure rose to 3,430 women that were killed in 2017 (Whelan 2019). Many have blamed Mexico’s judicial system for the lack of prosecutions which perpetuates the already grave problem. The Wall Street Journal continues stating, “Fewer than 5% of crimes in Mexico, are punished, according to the University of the Americas' Global Impunity Index” (Whelan 2019). This statistic shows the motives for women in Mexico to mobilize to fight against femicide and the lack of accountability for violent crimes.

Since its beginning, Día de las Muertas has become a social movement against violence against women, and has garnered enough support that in 2012, a 17-minute documentary entitled “Día de las Muertas” was released. Día de las Muertas was organized by the organization “Voices of Absence” that “pushes prosecutors to investigate cases and helps relatives navigate the judicial process” (Orsi 2019). During the Día de las Muertas demonstrations, women called for justice by protesting, marching, displaying posters and writing the names of victims on crosses. In 2017, women continued the Día de los Muertos traditions by wearing skeletal paint and papel picado while protesting the extreme gender violence. On the first day of the original holiday, Día de los Muertos, the holiday dedicates the day to “angelitos” or to the deceased children. Maybe with enough recognition, Día de las Muertas could become an addition to the larger holiday in order to recognize the women that have died due to gender violence. Women protesting against femicide have said their goal is to “pressure the government to put an end to what they say is rampant impunity fueling it” (Solomon 2017). The lack of punishment for these types of crimes perpetuates the idea that men can get away with these crimes. Women in Mexico believe that if these crimes continue to go unpunished, then women will continue to have their lives severely threatened by known and unknown men (Solomon 2017). A mother named Caludia Correa, who lost her daughter to an ex-boyfriend, was interviewed by Reuters stating, “As women we face a lot of danger. The authorities don’t do anything to find these killers and the killers realize that they are taking so long that they have a chance to get away. And they are going to continue doing so if we allow them to” (Solomon 2017). Protestors echoed Correa’s concerns by chanting, “Our daughters, where are they?” Another mother of a deceased daughter stated, “We are sisters of the same sorrow” (Orsi 2019). For her, the Día de las Muertas demonstrations have acted as a form of unity for those grieving the unnecessary deaths.

Since the vocalization of these issues, the United Nations has acted to try and aid these women. In 2018, the United Nations- European Union developed an initiative in order to help with the termination of femicide. The initiative included a 50 million euro investment  “aimed at helping to end the scourge of femicide” (Mendez 2018). The Spotlight Initiative is focused in Mexico, Argentina, El Salvador, Guatemala and Honduras, which all suffer from some of the highest rates of femicide and gender violence. The initiative aims to help end femicide by addressing policy gaps, strengthening institutions, promoting attitudes of gender equality, providing services for survivors and reparations for victims, and supporting women's movements (United Nations 2018). This initiative has begun to shine light on the judicial and policy changes that need to take place in order to see a decrease in femicide. According to the Wall Street Journal, there is a common practice in Mexico to initially investigate the deaths of women as suicides, which can place fault on the women themselves before holding the real perpetrators, commonly men, accountable. However, in the fight against gender violence, Mexico and other Latin American countries will also have to make a cultural change in the way they view gender and women. The culture of machismo has caused grave gender inequalities, causing the deaths of women to be less significant than other crimes, resulting in the sense of apathy by the government.

The recent demonstrations and protests show the organization and mobilization of enraged women who will no longer condone the violence women face in Mexico. The feminist response has grown, forming different groups, inclduing “Moms in Resistance”, and responding to current local and national events. A “glitter movement” was formed after women in Mexico City defaced an iconic monument and doused a security minister in pink sparkles in response to reports of police officers assaulting underage girls (Llana 2019). Earlier in 2019, President Andrés Manuel López Obrador had proposed to cut funds for 42 battered women's shelters across the country, causing women to take to the streets and protest, forcing the president to take back his proposals (Whelan 2019). The feminist movements in Mexico have proven that they will continue to protest until there is structural and culutral change in Mexico. The unification of these women through tragic shared experiences has stimulated a response that seeks to change the culture of machismo in Mexico.