Coca is not Synonymous with Cocaine: Coca Culture in Bolivia 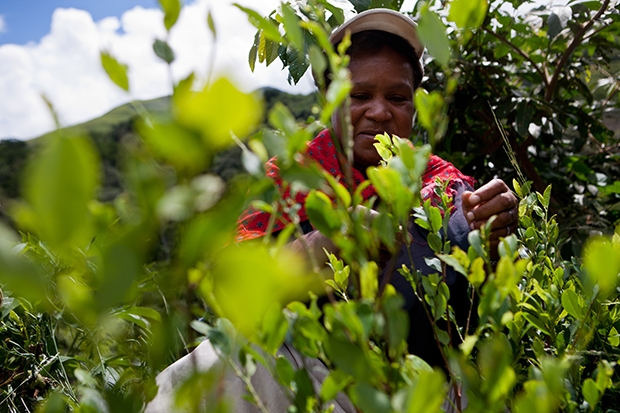 Coca is a leaf that is integrated in the Bolivian culture through rituals, medicine, food, religion, social interactions, and much more. The primary use for the coca leaf is consumption; it is chewed or brewed for tea. Coca leaves are not exclusive to Bolivia, rather many Andean countries such as Colombia, Chile, Argentina, Ecuador, Peru, Paraguay, and Brazil use coca for similar cultural practices as well.

Coca has been chewed and brewed by indigenous populations in the Andes for centuries. “In Bolivia, an estimated one third of the population consumes the leaf in natural form as if it were coffee, or tea1”. When chewing coca or drinking “mate” (tea made out of coca leaves) the substance gives one more energy and is a mild stimulant. The culturally valued leaf suppresses hunger, fatigue, thirst, and pain2. Many labor workers in Bolivia, especially those working the mines, who are expected to work long hours chew coca to give them energy, without having to feed themselves. The leaf has many uses and even tourists and locals use mate to combat the altitude sickness that is common when traveling to or living in the Andes region.

The coca leaf has been associated with cocaine by the United States and many other countries since the rise of cocaine use in the 1980s2. It is true that the process of making cocaine begins with the coca leaves, however, cocaine is highly processed and nowhere near the natural state of coca leaves. Cocaine is synthesized from a single alkaloid, cocaine, from the coca leaf and from there it goes through a long strenuous process to create the final product.  The usual cocaine alkaloid content in a single coca leaf is between 0.1 and .8 percent3. It is a misconception that coca leaves are harmful because when they are consumed raw, there are no harmful effects unlike the effects of cocaine.

It is important to be reminded that the coca leaf is a natural substance and is deeply ingrained in the Bolivian culture—mate and coca leaves are commonly sold on the streets of Bolivia. The immediate association of the cultivation of coca leaves with the production of cocaine is very harmful to the cultural and medicinal practices of the people in Bolivia. This culturally ethnocentric mindset of the United States and its harsh coca eradication policies have pushed indigenous cultures to embrace their connection with coca leaves even more, especially among the working class who have been using coca to help give them energy particularly since the Spanish Conquest4. The United States’ involvement was unwelcomed by Evo Morales, the current president of Bolivia, in 2008 when he stated that the Bolivian government would now take control over the war on drugs. Morales’ decision resulted in the United States retracting all aid from Bolivia.

In the recent New York Times article, “How Bolivia Fights the Drug Scrouge” written in September of 2016, The Times challenges the White House’s statement that labeled “Bolivia as one of three countries that ‘failed demonstrably’ to do enough to combat the drug trade”5. The article stated that Bolivia’s handle on the drug trade in the past decade has actually been praised by scholars and Western officials. Evo Morales’ policies take on a more humane approach than the United States. Instead of forcefully eradicating fields like the US, the Bolivian government only eradicates unauthorized coca fields by talking to coca growers and negotiating a solution, or finding alternative crops for them to grow. Bolivia strictly monitors the crops, and allots space for growers who register their land with the government.  Being a former cocalero, the Spanish word for coca grower, Morales is able to create thoughtful policies, taking into account the economic and cultural importance of coca in Bolivia.