For anybody who lived in Venezuela in the periods before and after Hugo Chávez’s death on 5 March 2013, these were strange and intense times. After a protracted battle with cancer and a final address to the nation televised on 16 December 2013, the man whose image and voice had been a constant feature in the nation’s imaginary and daily life —among opponents and supporters alike— was gone. Witnessing the immediate and intense boom in mechanisms created to preserve Chávez’s presence in the collective imaginary, in late 2013 I began working on an article in which I sought to chart some of the initial policies that were devised as Nicolás Maduro called on Venezuelans to ‘keep his image, his voice, his ideas alive’ after the week-long period of official mourning had drawn to a close1.

It was no challenge to determine the significance of Chávez’s passing: multitudes had stood by to watch as his coffin was transported through the streets of Caracas to the Academia Militar and winding queues of supporters waited day and night to bid their final farewells to el comandante presidente. But what should happen next? While Maduro talked of the need to keep the late president alive in an imperative and urgent tone, he simultaneously outlined a concern that has become an enduring challenge for the Bolivarian Revolution: how to keep its central protagonist in public view? In the article that was later published in the Journal of Latin American Cultural Studies, I argued that this imperative also articulated a demand for what can be considered, with Jacques Le Goff, ‘document-monuments’: that is, artefacts and gestures that would capture Chávez’s vitality and ensure his continuing —albeit virtual— presence. In turn, the two-fold objective of the ‘document-monument’ hinged on the need to stimulate collective memory and to secure continued political allegiance to the Bolivarian Revolution2.

As it happened, the announcement of Chávez’ death led immediately to the production of an exponential range of strategies devised to secure a coherent and enduring memory of the late president. These comprised official policies and declarations, like the state funeral and latter creation of a mausoleum at the Museum of the Revolution in Caracas, but they also featured a plethora of dedicatory acts and gestures initiated by individuals and groups who expressed their sympathy and grief and enduring loyalty. My analysis focused first on the proposal to embalm Chávez’s body, which was announced shortly after his death, as a literal approach to maintaining his presence. However, the article then turned to focus on the use of the late president’s signature as a central trope in mechanisms to cultivate and harness collective memory.

The signature featured at the centre of a program of free tattoos where supporters bodies would literally be signed; it was the core visual motif of Maduro’s presidential campaign and was also reproduced to mass scale (alongside a stencil design of Chávez’s eyes) as a painted mural on government-built housing blocks. This latter policy continues to this day. In a recent trip to Caracas, as I reclined back into the dentist’s chair my visual field took in a new brick building in Chacaíto, decorated by Chávez’s huge signature, painted in white. Other residential blocks from La California Norte to Fuerte Tiuna had also been “signed off” by the late president. Walking past a state bank in Las Mercedes, I even noticed that it had been integrated into the corporate logo.

signature that I had termed a ‘mobile trace of power’ continues to make a lasting impression on the urban landscape. As a recurrent visual trope, it serves as a reminder of the bureaucracy of the state, of the documents that execute government plans and of the intermediary whose authority is required. Following Jacques Derrida, I traced the signature back to the roots of the archive’s role as a site of power that hinges on the historiographical gesture of designating commencements and commandments. As a mobile symbol that exceeds the fixed site of the archive, Chávez’s signature constitutes an abstraction of the document that renders the stamp of authority an element of graphic design that can be incorporated into logos, archicture and bodies3.

Of course, Chávez’ signature was already a recurrent feature of the Bolivarian Revolution’s visual culture, as the ceremonial signing of documents during meetings or events was a recurrent feature of national broadcasts (cadenas). In one cadena in July 2011, Chávez had even dedicated several minutes to activating his encrypted electronic signature. Describing the mountainous piles of documents constantly presented for his approval, he explained that this technological advance would expedite the execution of government projects. Significantly, his signature even gained its own moniker: the rabo de cochino (the pig’s tail), together with the performative signing and the idiosyncratic comments and punctuation marks added to it, rendered the signature a trace of the interface of presidential body and executive power.

Tattoos
On this basis, it is perhaps no wonder that after Chávez passed the signature became a commemorative trope in its own right. By March 15, the Agencia Venezolana de Noticias (AVN) had published a feature about a couple who had

tattooed Chávez’ signature on their arms before he had passed away, while asserting that 400 people worldwide had done the same4. Soon after, a youth organisation announced that it was organising free tattoos of the signature because it had changed Venezuela and the lives of Venezuelans. Interviewees on promotional videos made this clear as they explained their reasons for getting the tattoo. One did it so that Chávez ‘will always be with us’, while another said that the signature would be written into the history books and should thus ‘remain on our bodies because it is historical’5. The signature’s bodily inscription hence gained historiographical traction through an affective and corporal bond. The tattoo shifted the focus that had initially been placed on the embalmed presidential body as a stimulus of memory onto the reproduction of its related symbol that could be reproduced across the social body, thus incorporating the body as living archive of ‘document-monuments’ tasked with perpetuating the “living history” (historia viva) that, as previous commemorative events using that slogan had it, Chávez had begun.

Maduro’s signature style
Significantly, in the presidential elections that followed Chávez’s death, the continued writing of “living history” was not presented a devolved act. Rather, the use of the rabo de cochino as a central image in Maduro’s campaign as presidential candidate reinforced the idea that Chávez was the central agent of the new national history that Maduro would continue to write. Following Maduro’s call to ‘keep Chávez alive’, the former’s electoral campaign featured recordings of Chávez’ voice and videos and photographs where he appeared, but it was the signature itself that had a starring role. Billboard photos of Chávez were accompanied by an endorsement of ‘Maduro desde mi corazón’, rendered using a typography (later released as a downloadable font) that mimicked Chávez’ own handwriting. The use of Chávez’s image and signature, rather than Maduro’s, thus presented the latter as a proxy, appealing to the existing imaginary of the writing of the state. This use thus expanded the symbolic range of the signature: the campaign set out a transferral of power that symbolically legitimised Maduro as the guarantor of the Revolution’s continuity.

Monumental Misión Vivienda
Finally, as the rabo de cochino was reproduced as a huge painted mural on Misión Vivienda buildings, the new blocks were harnessed as surfaces on which to create literal ‘document-monuments’. Indeed, the inscription of the signature on a monumental scale materialised the edifying function of that Le Goff insists inheres in the interested construction of history and commemorative landscapes. Crucially, this gesture has also made Chávez’s signature a feature of the domestic landscape that is constantly renewed: as new buildings are inaugurated in the ongoing project of Misión Vivienda, the presence of Chávez’s signature suggests that he continues to rule from beyond the grave.

Moreover, the nexus of authority and domicile forged by this strategy illuminates a pre-existing connection between the archive and the residence. Derrida states: ‘At the intersection of the topological and the nomological, of the place and the law, of the substrate and the authority, a scene of domiciliation becomes at once visible and invisible’6. The union of Chávez’ signature with the homes onto which it has been painted suggested a renewed process of domiciliation that lays claim to the document by, as it were, bringing it home. The buildings, decorated with the giant signature, thus take on a verbal function: they document Chávez’ authority in ordering them to be built, while their televised inauguration legitimises the message that Maduro’s presidency preserves and continues his predecessor’s legacy. In short, in its monumental form, the signature remediates the archive as a locus of power and commemorative site. Not only does it serves as a reminder of the presidential commandment that undergirds Misión Vivienda and the mandatedcommencement of more dignified life. By bringing the signature’s ‘mobile trace of power’ home to domestic spaces, the buildings that Chávez “signs off” despite his physical absence, work to summon among Venezuelans enduring loyalty to the Bolivarian Revolution. 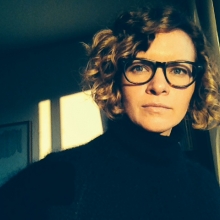 Lisa Blackmore
Lisa Blackmore is a Postdoctoral Researcher on the SNF-funded University of Zurich project ‘Modernity and the Landscape in Latin America’, led by Jens Andermann. Her research explores space, dictatorship, visuality and modernity. She received her PhD in 2011 from the University of London and has lectured in Venezuela and the UK. Recent publications include ‘Tecnologías visuales y el “archivo” de la desmemoria’, Estudios (2012) and ‘Online photography beyond the selfie’, in Artelogie, 7, (April 2015). Webpage: http://www.phil.uzh.ch/elearning/blog/modernity-and-landscape/