Despite growing up in London and presently working in his Brooklyn, New York studio, the Chilean-born artist Sebastian Errazuriz clearly retains an implicit and powerful emotional connection with his South American homeland.  Although the bold, multi-faceted maverick designer/artist indeed continues to characteristically “challenge audiences with work that is lyrical, macabre, bizarre, and eloquent,” through the use of “found and repurposed objects, unexpected interventions, and meticulously crafted interactive furniture” in nearly all of his works, a select few of his thought-provoking everyday object-utilizing works clearly demonstrate his strong sentimental link with his native Chile.1  Two of these said works are presently on display in the artist’s first solo museum exhibition – Sebastian Errazuriz: Look Again – here at the Carnegie Museum of Art in Oakland, and they are La Moneda Fire Screen and Tree Memorial of a Concentration Camp.2  True to the general description of his style, both of these works push viewers to “rethink the everyday, to confront the transience of life, and question the status quo.” Beyond this general pushing of the limits, however, in these works, Errázuriz also invokes particular emotions and implores his Chilean brethren, as well as the rest of the world, to reflect upon the horrific events stemming from the 1973 coup d’état in Santiago that took the life of then-president Salvador Allende.

After becoming the first democratically elected Marxist leader, heading the first openly socialist government in Latin America in 1970, Salvador Allende strove to continue the natural progression of the reformist programs of the Eduardo Frei Christian Democrat government that preceded him, continuing to politically empower the poorest and most disenfranchised sectors of Chilean society.3  Having been fairly elected by the masses as part of Chile’s long line of exceptionally peaceful and smooth governmental administration transitions in the context of a much bloodier and more violent Latin American setting, as the times got tough, Allende would rapidly lose much of his popular support.  Above all else, the economic failures of Allende’s ‘Popular Unity’ (‘Unidad Popular’) coalition and the resulting conditions stemming from that would ultimately lead to lessened support for the socialist regime, and eventually to a September 11, 1973 that would forever change the course of Chilean and world history.4

Incredible stagflation – an infamously dreaded economic situation in which the inflation and unemployment rates remain high, while economic growth overall slows down – coupled with difficulties in the production processes in both the industrial and agricultural sectors, most notably the key mining industry as a result of the steadfast move to increased nationalization, caused the disillusioned oligarchy, right-wing National Party, and many moderate Christian Democrats to come to support anti government trends in the armed forces.3,5  Truly, Allende and his Popular Unity government envisioned a measured, gradual transition to socialism on a national scale and even repeatedly warned against any sort of aggressive, non-constitutional transgressions not only on the part of dissenters, but also on the part of its own party’s actors throughout the government.4  Nevertheless, supported by covert U.S. intelligence centered in the city of Viña del Mar and with citizen disenchantment at an all-time high, the Chilean armed forces ultimately went against Allende’s plea, refusing to follow democratic means in order to immediately remove the socialist government, which they saw as an “internal enemy,” from power.  Alternatively staging a coup d’état, the military ousted Allende and his Popular Unity coalition from power on September 11, 1973 following an assault on the presidential palace, ‘La Moneda’, in which Allende died.

Following the violent armed forces-led overthrow, the situation in Chile, expected by many in the middle class who initially supported the takeover to return the nation to the more sustainable status quo of pre-1970, quickly deteriorated as the appointed president General Augusto Pinochet, of the ruling four-man ‘junta,’ soon subjected his populace to a myriad of unforgivable human rights violations.  Its more conservative, free enterprising, supply-side economic policies aside, torture, detainment in concentration camps, and the infamous ‘disappearing’ of dissidents came to be the most enduring and painful memories of the dictatorship under Pinochet.  Nevertheless, this environment characterized by human rights violations and suppression was the sad reality for Chileans until after his time in power finally came to an end in 1990.  In addition, the reality remains that, even more than two decades since the referendum that forced Pinochet to vacate the presidency, the immense pain and shocking consequences of September 11, 1973 have left Chile a country starkly divided in terms of the political allegiance and collective memory of its people still today.  It is exactly for this reason that Errazuriz’s temporary tree installation project in Chile’s national soccer stadium – a place of national recognition and symbolism that also possesses extreme historical importance – was a remarkable undertaking.  Through his tree installation project, abundant with his typical eye-opening and unconventional style, Errazuriz strove to ensure that nobody would be able to experience Chile’s Estadio Nacional without considering the place’s dark past.

Officially entitled “Tree Memorial of a Concentration Camp,” the end result of the Chilean artist’s project, aside from two years’ worth of difficult-to-acquire permits and clearances to the space for a week in the background, fundamentally involved nothing more than an approximately 33-foot tall magnolia tree, which was transported to the site live then planted at the very center of the National Stadium’s pitch.  After the successful transplanting of the magnolia at the field’s center, the doors to the typically-gated facility were opened to the public, as the entire stadium was transformed into a public park space, one in which visitors were encouraged to lounge, picnic, or sit, just as they would do in any other green space.  As visitors made use of the park during the weeklong installation exhibition, they were also asked to remember and honor those souls who perished and/or suffered in the brutal concentration camp established in that very same space by the Pinochet dictatorship after seizing power in 1973.

Despite the astonishing simplicity of the physical composition of the actual installation itself – merely a common species of tree – the notable aspect of this project was clearly the unconventional and significant environment into which it was placed.  By situating the tree in the context of what is traditionally the heart of the celebrated national sport that brings such joy and happiness to the people in modern times but also a place that possesses such a dirty and unfortunate past, Errazuriz achieved his ultimate goal.  Through his ephemeral installation, the artist successfully advocated against conveniently forgetting or overlooking the grave human rights breaches of the Pinochet regime in the past, while also making a plea for lasting peace.  By re-constructing the National Stadium space in a manner so unique and creating an experience so different than what is generally encountered there, the artist successfully pushed citizens to not accept the status quo and instead profoundly reflect upon what other roles the green space has had and potentially could fulfill.

Once the site of deplorable and almost unimaginable genocide that could potentially be overlooked and erased from the consciences of the common Chilean in exchange for some more palatable astonishing Alexis Sánchez ‘golazos,’ Errazuriz has tried to ensure that any Chilean who has experienced his installation will not be able to think about the national landmark without some deep reflection.  Particularly by culminating the week of activities at his temporary Estadio Nacional park with a traditional, friendly soccer match, which some 20,000 spectators attended, the artist seemingly bridged a sort of metaphorical gap, synchronizing the past and present, therein promoting a sort of peace.  This sense of peace could be described as two-fold, constituting both a general state of harmony amongst Chileans sharing a representative space that is innately theirs and also a more personal tranquility stemming from the ability to reflect upon and honor fallen brethren in an intimate, real way. 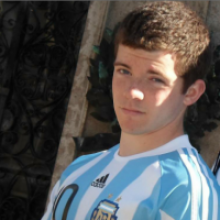