This history of Latin American economic development is no secret, especially to the region. Yet it is funny how old policies proven to not work are still valid for a politician to run on as a political platform. In the specific case of Argentina there are two main front-runners in the election, Daniel Scioli from the FPV (Frente Para la Victoria) and Mauricio Macri, leader of Propuesta Republicana and of the Cambiemos party. The two parties have differing economic views. The FPV is more focused towards state-led development. On the other hand Macri is for market-friendly policies. On October 25 the election was held and the results were so close that there needs to be another round of voting; neither Macri nor Scioli won 45 percent of the vote or won 40 percent of the vote and 10 percent more then the next closest candidate. This round, called the “run-off” election, will take place on November 22. The person who garners the most votes will win.

The incumbent party, the FPV, has a history of enacting policies that encourage state led growth. For example the oil company Yacimientos Petrolíferos Fiscales has been in the hands of the government as well as the Argentine airline company, Aerolíneas Argentinas. However if we look at Argentina over the past few years we can see a growing fiscal debt, foreign currency shortages and high inflation. These problems are the exact same problems that were occurring right before Latin America was plunged into its “Lost Decade” which was from 1980 - 1990. Clearly Argentina didn’t pay attention to its own history when they decided to keep their companies under state control.

However this isn’t the real problem. The real problem is that both candidates have been doubling back and altering their beliefs in order to pander the voter base. In other words both candidates have proposed policies that are counter to their beliefs. This is a problem because saying one thing and doing it are two different things. This kind of political platform is a problem across all types of political platforms not just the populist ones. Not only is this problem affecting the current election but it has affected past elections as well. Juan Perón operated on a populist platform and he fiscally ruined Argentina. While an extreme example, there are some parallels between the two cases. Scioli says “with investment, it will come down gradually, I think we can reduce it to single digits within four years.” Now lets look at what Juan Perón did, after he funded all his projects, such as nationalizing the Argentine railway system, the “total foreign-owned assets in the nation plummeted by 59%”(Pahowka). Although this initially boosted the economy, this boom did not last. Currently Argentina is having a hard time earning foreign currency because of its inability to pay back foreign creditors after its default. During Juan Perón’s first presidency he also had a hard time earning foreign currency. The parallels are undeniable.

Macri is the more economically liberal candidate. However he too panders to the voting base by saying he won’t privatize the YPF or the airline. Macri is catering to the center at the same time Scioli is catering to the center. Both candidates are being as vague and populist as possible in order to appeal to the middle class and earn their votes. However will they really keep their word, or will they simply do as they believe and not as they say?

Scioli and Macri need to take a page out of the Argentine history book. Argentina is currently poised to enter a huge recession if the next president doesn’t enact the correct policies. There is no clear-cut definition of the correct policies. However history tells us that the FPV and its state led economic policy have failed in the long run. Maybe it is time for Argentina to try a more free market and liberal approach to their policies. 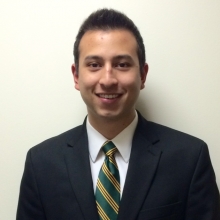 Evan Shen
Evan Sheen is a senior at the University of Pittsburgh majoring in Economic and Computer Science. This article was written as part of the course “Latin American Economic Development,” a writing seminar offered by Professor Marla Ripoll at the Department of Economics.